A Tailor and a Police Constable 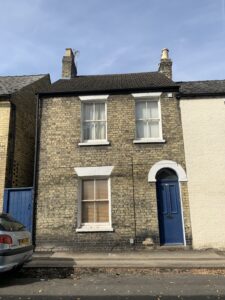 Head of household in 1881 is Jane Philpot.  She is 61 years old and unmarried.  She was born in Sturry, Kent.  Living with her is her niece, Kate Philpot.  Kate is a 20-year-old dressmaker who was born in Ickleton, Essex.  By 1891 Jane is living on Victoria Street working as a lodging housekeeper.

Head of household in 1891 is Jermyn Scott Brown, a 41-year-old tailor from Cambridge.  He is married to Eliza Jane (nee Holman) who is 38 and was born in London. In 1881 they can be found at 72 Kingston Street.

The couple have two children, Bertram (12) and Sidney (7).  The electoral registers suggest that they lived here very briefly.  Jermyn is still registered at 25 Pulling Terrace (on Mill Road) for 1890/1891 and in 1893 he is registered at 53 Gwydir Street.

Jermyn and Eliza are buried in Mill Road Cemetery.

Grace can be found on the register of East Road Girls School on the 2nd of October 1899.  The address given is 5 South Street, so the family haven’t lived for long on Sturton Street.

In August 1901 the Cambridge Independent Press reported on the Cambridge Borough Police Athletic Festival. John took part in the “100 yards handicap (members with over 10 years’ service)” and came fourth, winning a “silver Vesta box presented by Mr T H Mathers“.  This race was won by P.c. Leonard Savidge, who lived at 106 Ainsworth Street.

In his role as a Police Constable John appears in the newspapers a few times.  Boys were summoned “for gaming with money on St. Matthew’s Piece on June 2nd [1907] … P.c. Symonds said, in consequence of complaints, witness and P.c. Savidge were given instructions to pay particular attention to gaming on St. Matthew’s Piece.  At 6.20pm on Sunday, he saw the defendants and other lads toss money up in the air.”  The boys received a caution.

He also gave evidence against two undergraduates who had been cycling along All Saints Passage.  They were fined 10 shillings and 7 shillings costs.

Esther never married and can be found on the 1939 Register living at 29 Searle Street with four other women.  Two of them are workers at Chivers jam factory, Esther is a tailoress.

Grace never married and she can’t be located on the 1939 register.  She died in Cherry Hinton in 1983.

Doris married Frank Allin in 1933.  On the 1939 register the couple are living at 8 Green End Road.  Frank was in the Observer Corps.

According to Forces War Records, Leslie joined the Royal Air Force at some point between September 1939 and June 1940.  He enlisted at Uxbridge.  Leslie is recorded as killed in action on the 8th / 9th July 1942, however, it states that the ‘duty location’ was Wilhelmshaven.  The World War 2 Timeline on Forces War Records states for 8th July 1942 “A strong force of Bomber Command aircraft attack Wilhelmshaven and large fires are left burning in the shipbuilding area.”

It is likely that he died on the night of the 8th July and it was reported on the 9th July.  Leslie is commemorated on his parents gravestone in Mill Road Cemetery.

At that time he was with 101 Squadron, Bomber Command and based at R.A.F. Bourn.  Leslie held the rank of sergeant at the time of his death and was flying in a Wellington.

John died in 1947 and is buried in Mill Road Cemetery with Julia.