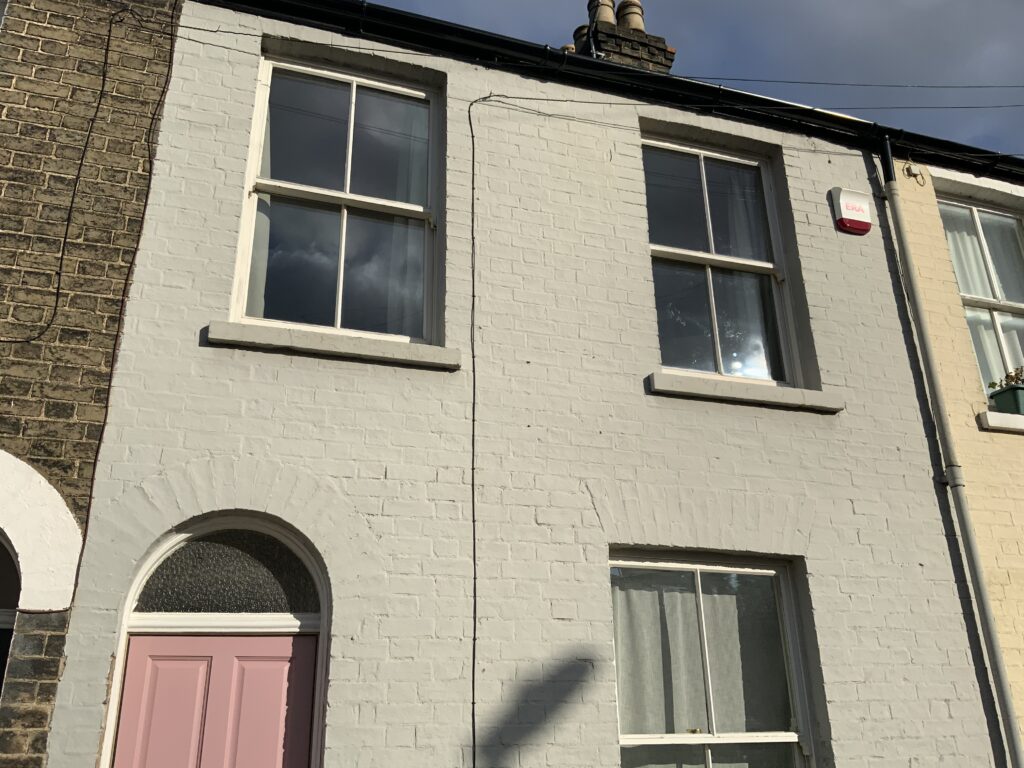 Number 106 is one of a group of five houses on the east side of Ainsworth Street.

Emma is now 35 years old and originally from Histon, and she has no profession listed. Husband John is now 32 years old, and his occupation is described as Signalman GER, an abbreviation meaning that he was a Signalman with the Great Eastern Railway. This meant he controlled the signals and points to determine the route trains would take.

By 1909 John is now 51 and a widower and remarries, at St Phillips, to Frances Emily Ogram.

In 1917 he joins the National Union of Railwaymen.  He is now aged 60 and has been a Signalman all his life.

On the 1901 Census we see that Leonard is 30 and a Police Constable who was born in Cottenham.  His wife Clara is 31 and from Rampton.  There are three young children, William (4), Margaret (2) and the 5-month-old Ann.  All their children were born in Cambridge.

By 1911 Leonard is 40 and still a Police Constable.  Son William is 14 and a telegraph messenger, Margaret is 12, Ann is 10, and there are three more children.  Nellie, 7, Charles, 5, and Leonard, 2.  Most of these children probably go to school, although Leonard hasn’t filled that in on the Census.  Leonard and Clara have been married for 15 years.

In his job as a Police Constable, Leonard is frequently in the local newspapers.  He frequently appears in court giving evidence against drunks, undergrads throwing things from windows, people causing obstructions in the street, carriage drivers failing to show lights, illegal parking on Coe Fen, an annoying organ grinder, a man losing control of his pig-float and landlords staying open past closing time.

He’s also quite a good runner.  August 1899 and it’s the fourth annual Cambridge Borough Police Athletic Festival at the Leys School. “This festival has become one of the most popular athletic meetings in Cambridge and is well supported by residents in the borough.” Cambridge Independent Press 18 August 1899.

Despite bring the runner to actually break the tape in the 100 yards handicap, it was decided that two other runners had past the line ahead of him.  So he came third and won a set of Cambridge beer mugs.  However, he did come first in the thread-the-needle contest and won “a fancy biscuit jar“!

In 1901 at the 6th Annual Festival he won the 100 Yards Handicap and won a “silver mounted glass tankard” for coming first. The following year he came third and won an “electro plated sugar basin“.  Then in 1903 he was on the winning tug-of-war team and they all won “electro plated and glass butter dishes“.

17th November 1905: “It is evident, from what has come to light this week, that the “Rag” with which the King’s Birthday…[was] celebrated in Cambridge, was the most serious that has occurred… both in damage done to property and the violence of the crowd towards the owners who tried to defend their property, and the authorities who sought to restore order.”

There were serious fires on Sheeps Green and Midsummer Common, where Leonard was positioned. “The most serious injury was sustained by P.c. Leonard Savidge, who was struck by half a brick in Emmanuel Street, as he was conveying a prisoner to the Police Station.  He fell to the ground, stunned and had to be taken to a surgery, where a cut about an inch and a half long… was attended to.”

The perpetrator was a member of Clare College, but it couldn’t be proved that he threw the brick.  So he was fined £20 and costs pf £1 12s 6d rather than being sent to prison.

20th May 1907: There was a fight outside The Geldart on Ainsworth Street. “P.c. Leonard Savidge stated that he heard of a disturbance outside the ‘Geldart’ publichouse while working on his garden, and on proceeding to the spot he received from Furniss of having been assaulted.” Herbert Sheffield, 24, was charged with assaulting Edward Furniss of 95 York Street.

11th September 1908: “Police Promotions… P.c. Leonard Savidge [has been promoted] to the post of Acting-Sergeant.” After this date the papers either refer to him as a Police Constable, an Acting Sergeant or a Sergent.

On the 24th August 1910 he was on the Cambridge Borough Police cricket team who went to Bedford to challenge their police force.  Leonard was run out and the Bedford team won.

20th June 1913: “Fire at Kerridge & Shaw’s.  The outbreak was discovered by Mrs Annie Peters of 50 Sturton Street.” the Central Fire Station was called and some residents “Knowing where the hydrant was they immediately set to work to play on the flames, which ahd broken out in a heap of sawdust and rubbish.” Police Sergeant Leonard Savidge arrived with the motor-tender and helped to put out the fire.

This wasn’t his first fire, he helped put out a fire behind a confectioners on Petty Cury back in January 1899.  Then in September 1915 he helps agin with a fire at a builders on Abey Walk.

In October 1915 is the first mention of him having an allotment.  He was at Barnwell Allotments when he observed fireworks in the street.  They  “made a surprisingly loud noise and lit the sky up vividly“, he stated.

24th October 1917: “A letter was received from the Mayor offering a cheque value £1 1s for the services of Police Sergeant Leonard Savidge and Acting-Sergeant Pott as Mace Bearers during the Mayor’s year of office, and it was agreed that the offer of the Mayor be accepted with thanks.”  The newspapers report that he was also mace bearer for the Mayor in May 1918 and in November 1919 the formal term “Sergeants-at-Mace” is used.

11th October 1918 and Leonard is back on his allotment winning prizes for his veg.  “Police Vegetable Show. Potatoes (round) 1. Sergt L Savidge (grown on Barnwell Allotments)” also “Beet (long)… 3. Sergt L Savidge.”  The paper didn’t record the allotments for his beets, so they must’ve been grown in his garden at number 106.

2nd April 1920 “Inspector Leonard Savidge a few years ago shone in the police athletic world and is the proud possessor of a very large number of trophies.  He was promoted to the rank of Sergeant in 1911, and has always performed his duties faithfully and well.”

There is a photo of him with some colleagues at the Peterborough Show, July 1895 here on British Police History.

He appears in the papers a few more times as a pall bearer at various police funerals and in 1922 he and Clara leave Ainsworth Street.  By 1939 he is living at 124 Gwydir Street with his daughter Margaret, Clara died in 1934.  Leonard died in 1946

William Savidge – marries Marjorie Reynolds in 1919,and becomes a “skilled worker telecommunications” in Berkhamstead.  He is mentioned on the probate of his sister Ann’s husband Fritz.

Margaret Savidge – she lives with her father at 124 Gwydir Street until her marriage in 1940 to George Clarke. Her entry on the 1939 register isn’t very clear, but she most likely works as a Telephonist for the Post Office.

Ann Savidge – In 1939 Ann is working as a housemaid at a property on Hills Road.  She becomes the second wife of Fritz Johann Heinrich Krenkow in 1947.  Fritz is an uncle of D. H. Lawrence.

Nellie Savidge – in 1939 she is living at 35 Hartington Grove working as a Housekeeper to an Eleanor Currie who is listed as a “Christian Science Practioner”.  Nellie doesn’t marry.

Charles Savidge – there is a transcription of his Obituary here at My Primitive Methodists.

Leonard Savidge – In the Summer of 1939 he marries Edith Martin. They live at 150 Scotland Road and he is a General Shop Keeper.