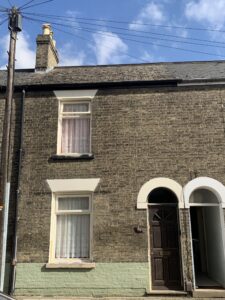 Thomas and Frances Sizer, a 27 year old Cambridgshire couple, live here in 1881 with their two young sons.  Thomas is a carpenter.  Son Sidney is 3 and Edward is 2.  Two of Thomas’s siblings live with the family.  Sabina Sizer is a dressmaker and Ebenezer Sizer is also a carpenter.

In 1891, 26 Kingston Street is home to the large Tolliday family. Harry Tolliday, a 40 year old Railway Engine Driver from Cambridgeshire, was married to Julia, a 40 year old from Suffolk. Their eldest daughter, 14 year old Emily, was born in Suffolk, while her sister Susan, who was also 14, was born in Cambridgeshire, suggesting they moved to 26 Kingston Street in 1877. They also had two sons, George, 12, and Herbert, 7.

By 1901, 26 Kingston Street is home Kate Fox, a 34 year old from Cambridge, and her husband Frank Fox, a 30 year old from Knightsbridge, who worked as a Police Constable. They have a newborn son, Ernest Fox.

In 1911, 26 Kingston Street is home to Mary Ann Cornwell, a 53 year old Widow from Isleham. She runs a railwayman’s rest house; though whether number 26 itself is run as the rest house, or she works at a rest house, is not specified.