A Cleaner, A Painter & A Boot Repairer 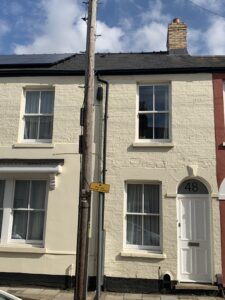 James Reed, a 25 year old boot maker who was born in Cambridge, lives here with his wife Mary Ann.  She was born in Balsham and is 24 years old. James’s brother Harry, 21, lives with the couple; he’s a hatter’s assistant.

In 1891, 48 Kingston Street was the home of Martha Papworth, 29, married to 25 year old Ingle Papworth, who works as a cleaner on the railways.

By 1901, 48 Kingston Street is home to the Osmond family. Mary Osmond, a 34 year old from Dereham, Norfolk, is married to William Osmond, a 30 year old from Tisbury, working as a Painter. They have one son, William, aged 2.

In 1911, 48 Kingston Street was home to the Westbrook family. John Westbrook, a 31 year old Boot repairer from Fulham, is married to Mabel Westbrook, a 24 year old from Bury St. Edmunds. They have a newborn daughter; Stella.