A General Shopkeeper and a Laundress 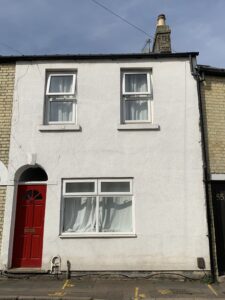 Ann and Selina have a memorial in Mill Road Cemetery along with Ann’s husband James and their daughter Emma Jane.

This family have moved from  number 47.

Head of household is Mary Ann Laurie.  She is a 52 year old widow and works as a laundress.  She has five of her children living with her at the time of the 1901 census.

Emma is 29, Frederick is 21 and a photographers assistant, George is 19 and chemical lab assistant, May is 17 and Annie is 15.  Mary’s grandson, William Edward James (11) is also living with the family.  Edward is the son of Mary Ann’s eldest daughter, Harriet Gates.  There is also a boarder named Joseph Colls, a 41 year old tailor from Cottishall in Norfolk.

May marries the Rev. Robert George McAlpine in 1915 and his job takes them round the country.  On the 1939 register Robert is “A Clerk in Holy Orders” and the couple are living in Normanton Vicarage, Derby.  Their son, Laurie Gwatkin McAlpine is living with them at that time, but is listed as being a Student at Jesus College.

Laurie joined the 9th Survey Regiment of the Royal Artillery during World War 2.  He died of wounds in July 1944 and is buried at La Deliverande War Cemetery in Douvres.