The Laurie's and the Endersby's 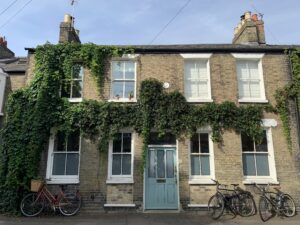 Head of household in 1881 is William Laurie (or Lawrie).  He is a 50 year old army pensioner from Cambridge. William was raised as non-conformist, and was baptised, along with five of his siblings, at the Downing Street Meeting on 16th June 1833.

William is married to Mary Ann (nee Gates), aged 32, who works as a laundress.  She is also from Cambridge.  The couple may have been living here in 1871.  They are on the census for Sturton Street, but the street was unnumbered at the time of the 1871 census.

On that census William is recorded as being a Pensioner of the 20th Regiment, he is blind. William enlisted as a Private with the 1st Battalion of the 20th Regiment of Foot in 1833. Described on his army records as 5’7″, with a fresh complexion, grey eyes and auburn hair.

He was discharged in 1859, “being unfitted for further service“.  William “is in possession of one good conduct badge… in possession of a Crimean Medal & 4 clasps“.  The discharge is due to “total loss of vision of both eyes by ophthalmia disorganising the different structures – general health impaired”

William’s sister, Hannah Laurie, lives next door at number 49, at least until 1901.

William died in 1886 and was buried on the 17th of February.  There’s no record of his gravestone, but his mother Sarah and sister Hannah are buried in Mill Road Cemetery.

Mary Ann is head of household in 1891.  There are eight children living here with her.  Arthur is 17 and Frank is 16, both the boys are working as grocer’s assistants.  Walter is 15 and a college servant, Edward is 14 and an errand boy, Frederick is 11 and a scholar.

Eldest daughter Jane is working as a domestic servant for Emily Oliver, a ladies outfitter, at 11 St. Andrew’s Street.  Jane marries painter and house decorator Thomas Horwood in 1897 and they move to Aylesbury in Buckinghamshire. Jane’s brother Edward is living with them in 1901 and working as a paperhanger.

In 1891 Emma is listed as a visitor at the home of Mary Ann Godfrey of Portway, High Road, Melbourn.

Arthur marries Ethel Kate Holmes in 1898.  On the 1901 and 1911 census returns he is recorded as being a grocer and tobacconist. He and Ethel have at least five children.  However, by 1914, the family has emigrated to New Zealand.  The 1914 electoral roll shows him working as a farmer, but, by 1919, he is again working as a storekeeper.

Frank also remains a storekeeper.  He married Emma Amelia Moore at St Matthew’s Church in September 1907.  In 1911 the couple are living at 22 Magdalene Street, where Frank works as a Grocer.

Walter married Mary Louise Haynes at St Matthew’s Church in August 1900.  The couple can be found living on Club Row, Longridge in Lancashire in 1901, and then in Stockport in 1911.  Walter works as a Steward in a chemical laboratory.

Due to vascular disease of the heart (V. D. H.), Walter was Class B when he signed up in November 1915. “fit for Garrison service at home or abroad.”  He is described as having a fresh complexion, blue eyes and brown hair.  Walter served at home until 18th June 1918 when he was discharged “no longer physically fit for War Service” due to the V. D. H. and associated epilepsy. Described at discharge as “a sober and hard working man” of very good character.

Edward (as noted above) was living in Aylesbury with his sister Jane in 1901 and working as a paperhanger.  Edward married Ethel Johnson in 1906 and became a decorator.  During World War 1 he served with the 6th Battalion of the Dorsetshire Regiment.  Edward died of wounds on the 14th June 1918.

The Cambridge Electoral Register shows a Harry Negus registered at this property between 1895 and 1898.  Therefore, the Laurie family must have left 47 Sturton Street to move to number 53 Sturton Street in 1895.

William B Walker, 51, carpenter, b. Coton

Albert A Walker, 17, blacksmith, b. Cambridge

In 1911 Albert Endersby is head of household.  He is the son of David and Susannah Endersby who run a grocer shop on York Street.  Albert married Ada Louisa Ince in 1907.  He works as a mattress maker for W. E. Lilley & Co. on Market Street. The couple have a 2 year old daughter called Hilda May.  They also have a boarder, 22 year old Jesse Turner a grocer’s assistant. Perhaps Jesse works with Albert’s father?

During World War 1 he serves in the 4th Battalion of the East Surrey Regiment.  He is with the British Expeditionary Force and spends time in the Lewis Gun Section.  On the 6th of August 1917 he receives a gun shot wound in the buttock.  After recovering from the injury, he returns to France.  On the 7th of August 1918 he is injured in the back with shrapnel from an enemy shell.