A Widow and a Butcher 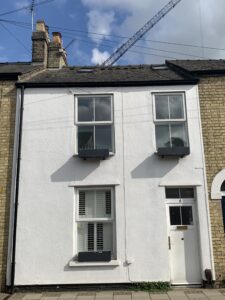 Thomas  and Mary Yarrow live here in 1881, they were both born in Little Downham, Cambridgeshire.  Thomas is 69 and a labourer, Mary is 62.

Bn 1891, Thomas Yarrow has died and Mary Yarrow is a 71 year old Widow.  She lives here alongside her 39 year old Daughter Annie Yarrow, working as a Clerk. Also living there was a visitor, Elizabeth Target, a Staymaker’s assistant. This meant she helped in the production of corsets, also known as stays.

By 1901, number 6 is now the home of the Swann family. Robert Harvey Swann, aged 31, a Butcher, is married to Mary Augusta Swann, who is 27. They have two children: Edward, aged 3; and Gladys, aged 1. Also living with them is Annie Swann, Robert’s cousin, a 22 year old from Willingham, working as a School Teacher.

Robert Swann is one half of butchers Swann and Sansom who work out of a shop at 100 Sturton Street.

In 1907 Robert became a Special Constable.