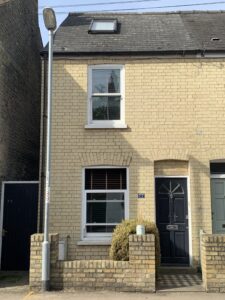 Head of household in 1891 is 47 year old Charles Youngs from Witham in Essex.  Charles works as a railway guard for the Great Eastern Railway and is married to Susan.  Susan is 45 and was born in Royston.

The couple have moved here from number 79 Sturton Street.

Head of household in 1901 is Philip George  Mudd, a 46 year old manager for the General Post Office.  He was born in Cambridge.  Philip is married to Martha Elizabeth (nee Dye), aged 43 from East Dereham in Norfolk.  The couple previously lived at 25 Hooper Street.

In 1911 Philip is a postman and Martha records that her birth place is Holt, Norfolk.  The couple have been married for 26 years and had no children.

Philip died in June 1916 and his address was given as 77 Sturton Street.