Number 4 is one of a terrace of three houses on the east side of Ainsworth Street.

Emma died October 1st, 1898 and is buried in St Andrew Churchyard in Chesterton. Her son, George Arthur, is memorialised on her gravestone “died of enteric fever at Ladysmith, South Africa Jan 5 1900, aged 27”. He was a shoeing smith, Sergeant, in the 5th (Royal Irish) Lancers and died during the Boer War.  It goes on to say “also James Doggett died Sept 27th 1935 aged 87 years”.

Frederick joined the Suffolk Regiment in November 1899. In 1901 he’s stationed on Alderney.

Inhabitants are now Sidney James Melton, a Carpenter and joiner from Rougham in Suffolk. He’s married to Sarah from Waterbeach and they have four children with them in 1901. Gertrude (Mary Gertrude Mabel), Albert Sidney, Elsie and Ada. They lived at no. 15 in 1891.

On the 1911 Census they’re living at 48 Gwydir Street.  It records that they had eleven children, seven of whom are still alive.

In 1916 he joined the Amalgamated Society of Carpenters and Joiners. He had been in the trade for 35 years.

Sidney and Sarah are buried in Mill Road Cemetery with two of their sons who were born after they moved to Gwydir Street.

In 1921 James is still driving railway engines.  He works for Great Eastern Railway and is based out of Cambridge Station.  Vera is now 18 and works as a clerk for Kerridge Junior Builders on Sturton Street.  Stanley is still a full time school boy.

Thomas is still living with them and is now 73 and is a retired time keeper for G.E.R. 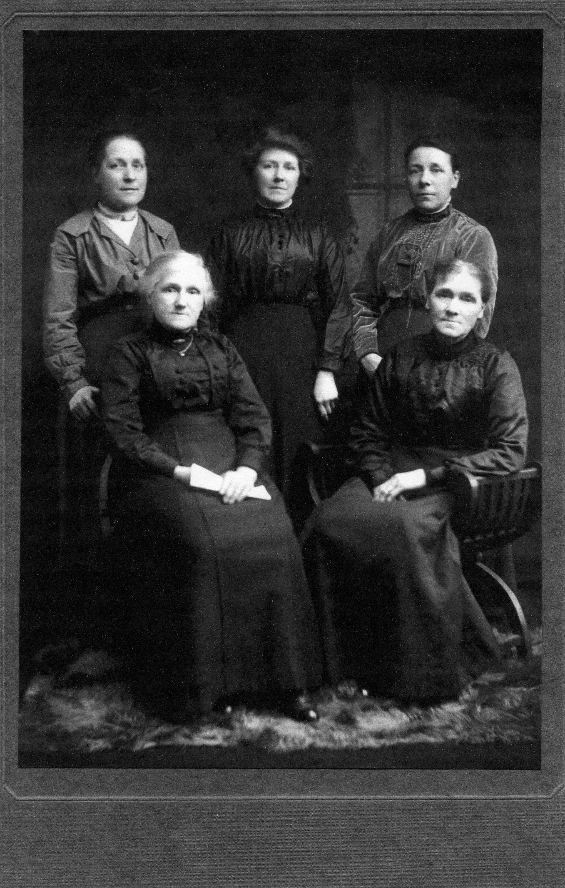 Jessie Phillips (nee Franklin) and her sisters. Jessie is standing at the back on the right. Used with permission of her descendants.

On Thursday 11th November 1926, James is driving an express train from Liverpool Street. When the train reached Broxbourne Station “He had got down from the footplate and was attending to his engine when another train coming from the opposite direction knocked him down, killing him instantly.” He is buried in Mill Road Cemetery.

Stanley lives at no.4 until he marries Olive Whitfield in 1937 and they move to Fallowfield. He’s a tailor’s salesman.

By 1939 Jessie is living here with her daughter Vera, who is still working as a builder’s clerk.  Presumably still with Kerridge.

Jessie dies in 1944, still living at number 4, and is buried at St Clements Church.

Vera appears on electoral rolls and in Kelly’s Directories until 1967, still living in 4 Ainsworth Street. She passed away in 1983.