1513/14: by this year William Stevenson paid rent, and then Hankyn Ancell.

1514: around this year Walter Hewke paid Councillor Hankyn Ancell £100 for the Griffin. Intention was to give the property to the college, Trinity Hall, of which he had been Master since 1512. He entertained the fellows of Trinity Hall to dinner there and died afew weeks later. In his will property left to the college.

c. 1537-8: Trinity Hall sold the property to Thomas Farowe. He also leased The Bull in the same parish.

1540: Thomas Farowe left the pub to his wife and son in his will.

1565: William Lyne took over and the Lyne family retained their interest in the estate until c. 1617.

The will below refers to The Griffin in St Clements parish. Documents sent by LP in 2022. 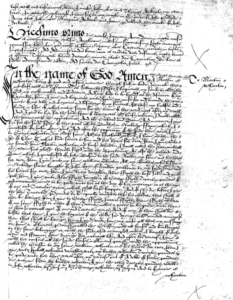 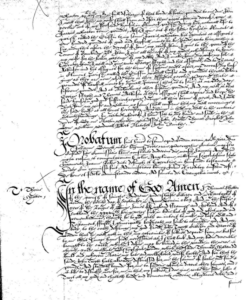 In the name of God, Amen the six day of December 1606 I Martin Wharton being of good and perfect  memory though sick in bodie, doe make this my last will and testamente as followethe. Ffirste I bequeath  my soul to almighty God my only maker and Redeemer, and my body to be buried at the discretion of my  Executor. Item I give and bequeath unto Joan my wife for and towards the payments of my debts and  legacies and discharge of my funerall all those my houses and lands in Elye of what nature soever for the  terms of the yere’s next after my death and I give to her for the said space of three yeres the house  wherein I dwell called the “Starre” with the appurtenances and the orchard and Barne, and moreover I  give her for the said space of three yeres all my Boothes in Sturbridge ffayre which I purhcased of John  Lyne gent, and after the expiration of the said three yeres I give to Garvis Wharton my eldest sonne all my ffrehould coppihold which I have within the Isle of Elye of what kind soever to him and his heires for  ever item. I give unto my second sonne Martin Wharton my house wherein I dwell called the Starre with  all the wainescot glasse thereto fixed with the appurtenances and also the orchard and Barne which I  purchased of John Blossome to the said Martin my sonne and his heirs for ever. Item I give unto my  sonne William Wharton all my boothes which I have in Sturbridge ffayre boughte of John Lyne of  Harlton gentlemen to my said sonne and his heires for ever. Item I give to my daughter Alice Ffryth the  best silver and guilt pott. Item I give unto Alice Ffryth daughter of George Ffryth Twentie pounds of good curraunte money to be paid unto her at the day of her marriage or at the age of one and Twentye yeres,  which shall firste happen, and if she die before I give the said twentye pounds to be equally divided to  those his children that shall then be livinge. Item I give to George Ffryth Jarvis Ffryth Joan Ffryth  children of my sonne Ffryth to either of them Twentye nobles a peece to be paide unto them at their  several ages of one and Twentye yeres, and I give the legacies of the child soe dyenge to be divided  amongst them that shall be livinge. Item I give upon to Joan my wife all that my messuage or Inne in  Climent Parish in Cambridge called the Griffin with all the houses and and buildings to the same  belongine or with the sameide used or occupied which I bought of John Lyne and Ffrancnces(?) Lyne  duringe her natural life, and after he decease I give with her consent all the saide houses in Climent  Parish with the appurtenances called The Griffin to my sonne William Whaton and his heirs for ever. I  give unto Isabell Wharton daughter onto my brother Wharton Twentie pounds to be paid onto her three  yeres after my decease out of a debt of fortie pounds due onto me from my brother Wharton I give the  other twentie pounds to John Wharton £6-15-4, to George Wharton £6-13-4, and to Henrie Wharton £6- 13-4 in full discharge of that bonde of fortie poundes to me due. Item I I will that Jone m wife shall from  and after three yeres after my cecease pays yerelle out of my foresaide houses in Climent parish during  her naturall life to Jarvis Wharton tenne poundes, also I give out of the said houses in Climent parish  called the Griffin to my sonne Jarvis Wharton his executors or assignes one hundred poundes of good and lawfull money to be paid unto him within six months after the decease of Jone my wife Item I give to the  poore of the Towne of Cambridge £10 Item I give to all the rest of my goods whatsoever to Jone my wife  ofr the better payenge of my debts and I make Jone my wife my sole Executor Item I will and give unto  George Ffryth and his assignes, and to Thomas Atkinson and his assignes for the terme of sitene yeres  after my decease my house in Climent parish called the Griffin withall houses and groundes thereto  belongings as they are now used, they or their assignes yerelie payeng thirtie poundes of lawfull money  by equal porcons (that is to say) at our ladye daye fifteene poundes, and at Michaelmas other fiftene  poundes, and my will is that Geroge Ffryth and Thomas Atkinson or their assignes shall repaire and keeps the said house in good and suffifent repaire duringe all their terms of yeres, and I will that Jone my wife  and William my sonne shall confirm this my will concernings the saide house at all tymes hereafter.  Anything in this my will to the contrary nothwithstaninge. In witness whereof I have set to my hande and  seale in the presence of By me Martin Wharton. Witnesses John Searle, Thomas Crowley, John Lyne,  William Woodwall, Robert Matchet, John Smithe.

1688: Christopher Green split estate but the two parts were reunited in 1706 and passed to Edward Green of Hinxton