1556: death of John Richardson who left property to his nephew Christopher

1688: Christopher Green the Elder, college cook of Caius owned nos 38-41 Bridge Street. In 1688 estate temporarily split between his two children but by 1706 properties reunited and stayed in ownership of Edward Green I, cousin of Christopher. John Curtis named as holder of Griffin.

1750: In the Old Red Lion Yard Alderman Nutting carried on his business as a coal merchant and dealer in corn, deals, iron, timber and salt. he may also have kept the inn. (Vanishing Cambridge, Mike Petty)

1803: according to T E Faber it is likely that the name of the original Red Lion in Bridge Street at no.47 was transferred to no.39.

1821-46: old Red Lion was revived and the designation’New red Lion’ was needed. 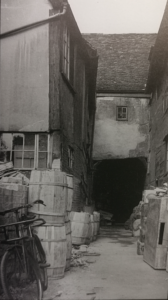