[In 1841 after Trinity Yard is listed Clarke then Holland]

Robert Clarke also had student lodgers and a letter has survived from one of them. 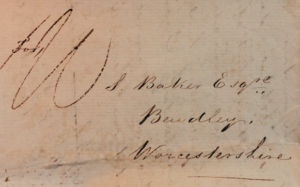 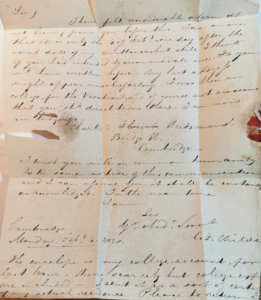 Sir, I have felt considerable alarm at not hearing from you before this. I am aware that it is only the 4th of Feb, one day after the usual date of my remittance, but still I think if you had intended to accommodate me, you would have written before. My last address might appear unsatisfactory. I was then in college for the vacations and of course not anxious that you should direct to me there. I am now in lodgings-

I trust you will in common humanity take some notice of this communication and I can assure you it shall be instantly acknowledged. In the meantime

I am Sir your obedient servant C F Childe

The envelope is my college account for last term. None scarcely but college expenses are included – I sent it as a sort of certificate of my actual residence. Please to return it.

[In 1851 Richard Holland is listed immediately after the Foundry Yard]