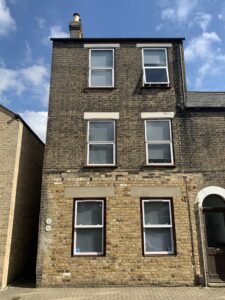 Alfred and Jane Wisbey live here in 1881.  Jane is a 20 year old milliner and Alfred a 23 year old draper.  They were both born in Cambridge.  They live with Elizabeth Braddy, a 48 year old general domestic servant from Great Wilbraham.

In 1891, 34 Kingston Street is occupied by Ebenezer Nash, a 34 year old from Berkshire, working as a Draper. He is married to 28 year old Eva Nash, and they have a 5 year old son Arthur.

By 1901, 34 Kingston Street is home to the Ayres family. Georgina Ayres, a 32 year old from Linton, who is married to Charles Ayres, a 34 year old working as a Whitesmith. They have 5 children: Gertrude, aged 10; Beatrice, aged 7; Sidney, aged 5; Annie, aged 3; and newborn Gladys. Living with them is Georgina’s mother Selina Faulkner, a 75 year old Widow from Newmarket, and Georgina’s sister Mary Faulkner, a 42 year old Laundress from Linton. They also have two boarders: William Patman, a 50 year old Tailor, and his 11 year old son Ashley.

Charles grew up at 82 Sturton Street.