History of the Coburn Family 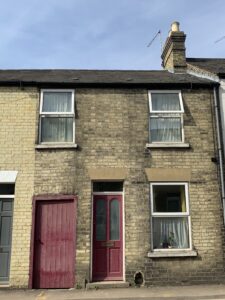 Head of household in 1891 is Charles Coburn, a 37 year old bricklayer who was born in Compton, Bedfordshire.  He is married to Sarah, 36, from Meppershall in Bedfordshire.

The couple have four children.  Annie Louisa is 10 and was born in Compton like her father. Albert Charles (8), Priscilla (3) and Percy (1) were all born in Cambridge.  There is another daughter, Rosa, she is now 16 and working as a domestic housemaid at the Vicarage in Cherry Hinton.

Annie marries bricklayer Ernest Leeke in 1904.  In 1911 they are living on Sedgwick Street with four children.

Albert married Mary Elizabeth Claydon in 1905.  They move to Fulbourn where Albert works as a hawker of hardware.

Priscilla married shunter John Thomas Todd in Pinxton, Derbyshire in 1907.  Her sister Eva was a witness.

At 69 Sturton Street in 1911, Charles is now 58 and continues to work as a bricklayer.  Percy is 21 and working with his father as a bricklayer.  Susy is 14 and recorded as “Cissie” on this Census.  Charles has been very specific about his childrens place of birth and has written “69 Sturton Street”.  The couple have now been married for 30 and have had eight children, two of whom have died.

In 1916 Violet married Sidney Vail, who was living at 25 Ainsworth Street at that time.  The history of Sidney’s family (including a newspaper report on their wedding) is recorded at 10 Ainsworth Street.

Violet appears twice on the electoral rolls for 1929. Once at 25 Ainsworth Street and once at 18 Abbey Walk with a Benjamin James Rickard.  She doesn’t appear on the registers with Sidney again.  He died in 1934.

Violet remarried after Sidney died.  Her new husband was, unsurprisingly,  Benjamin Rickard, who worked as a crane fitter for the LNER.  He died in 1947.  Violet’s third husband was George Nunn, who she married in 1949.

Eva married Frederick Newman in 1915.  Frederick transferred from the Army into the Royal Flying Corps in 1917.

Percy married Lilia Clarke in 1912.  The couple lived at 14 Adam and Eve Street.  On the 1939 Register they can be seen living at 12 Edward Street and Percy is working as a jobbing bricklayer.

Charles is registered at 69 Sturton Street until 1915.

Cissie married Harry Hagger in 1915, and it is Harry who is then registered as living at this property until 1923.  Cissie died in 1918, aged 22.  When Harry left, his two sisters moved in.  Lydia Hagger and widow Sarah Ann George lived at number 69 until 1932.

The electoral register shows that Sidney Arthur and Ivy Elizabeth Yorke is living here.  Sidney spent his childhood at 86 Sturton Street.  The couple appear on the 1939 register living at 25 Abbey Walk, where Sidney gives his job as restaurant sculleryman.  There are at least five children on the same record.