A Painter and a Millers Labourer 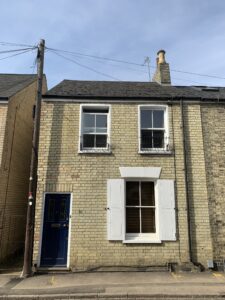 Head of household in 1901 is William Boreham a 57 year old miller’s labourer who was born in Radwinter, Essex.  He is married to 51 year old Matilda (nee Morley), who is from Little Abington in Cambridgeshire. Three of their children are living with them.  Elizabeth is 24, Harry is 22 and a brewer’s labourer, William Arthur is 17 and a butcher.  Matilda’s 9 year old niece, Violet Morley, is staying with the family at the time of the census.

The family have moved here from number 72 Sturton Street.  The elder son, Fred, is living at number 95 with his wife Sarah.

Harry married Kate Selina Bailey in 1902.  Kate is the younger sister of Susan Bendall Bailey who married Harry’s older brother Frederick. On the 1911 census the couple are living at 93 Sturton Street.

William Arthur married Frances Maud Thorogood in 1909.  In 1911 the the couple are living at 85 Sturton Street with Matilda.