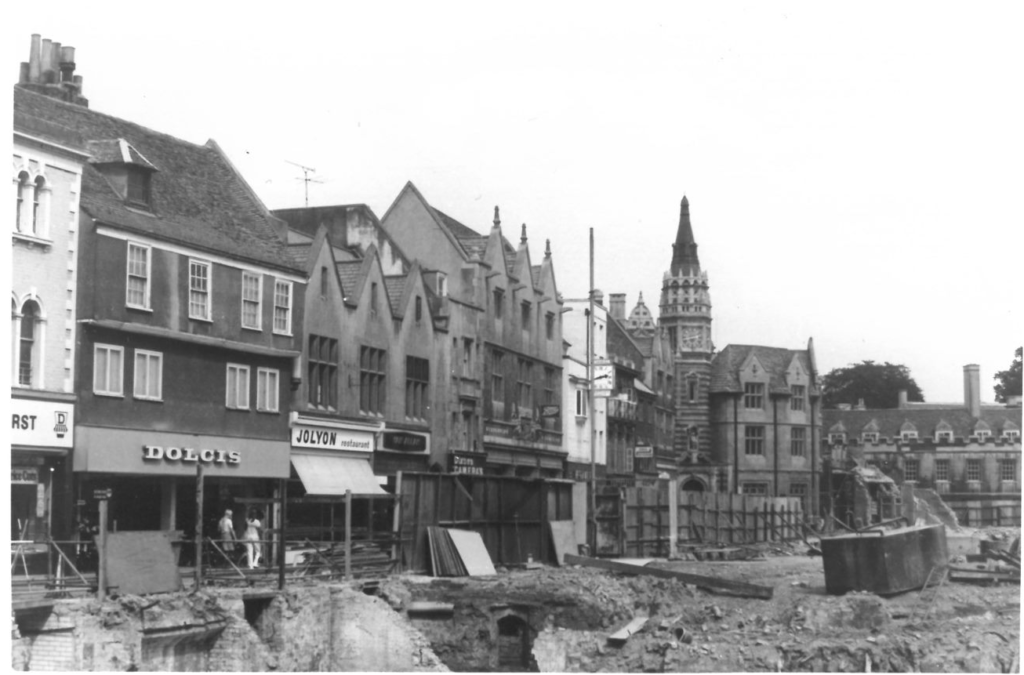 Petty Cury was originally the bakers’ street in the 14th century. By the 15th century it housed the city’s major inns. It first appears in documents around 1330. It is Petycure and the residence of Thomas Furbisshour in 1396.

Photos of the street can be found: 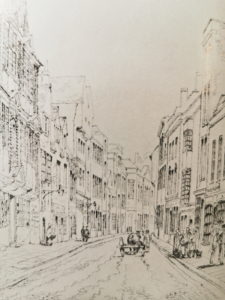 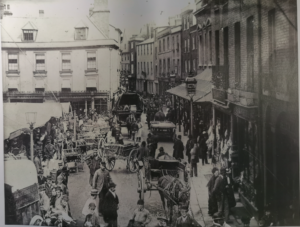 Circa 1885, looking towards Petty Cury, Guildhall on right and 1-2 Market Hill on left

26/12/1917: Margarine Queues – The queues, which have been getting larger day by day in Petty Cury, assumed such alarming dimensions on Saturday that one person at least was injured and others fainted. Margarine was the chief commodity sought, a supply having been delayed the day before owing to the fog. The Borough Food Control Committee took commendable action to consider how best to relieve the situation. They suggested that traders should transfer their stocks of margarine to the Corn Exchange and sell it there, and the Committee would give them every facility; they also suggested the margarine should only be sold in libs, or multiples of lib. Some was transferred and between 2 and 4 o’clock 1,000 transactions in margarine had taken place. The people were arranged in queues outside the hall. The margarine was put up in lib and 2 lb packages, the limit to each person being 2 lb. Everything went off without a hitch (Cam.News)

19/1/1925: Petty Cury and Market Street, Cambridge, today commenced their career as one-way streets with the object of relieving congestion in these streets whose narrowness has ever been the subject of discussion. Petty Cury will only be used for vehicular traffic towards Market Hill. At present these regulations do not apply to bicycles. A policeman agreed that someone was bound to make a mistake – “It wouldn’t be Cambridge if they didn’t”, he said (Cam.News)

6/11/1929: Nearly thirty arrests were made during a Guy Fawkes ‘Rag’ on Cambridge Market Hill. Early in the evening an attempt was made to light at bonfire in Petty Cury and there was a considerable blaze in front of Falcon Yard before the police noticed it and it was extinguished. In Rose Crescent an effigy was soaked with petrol, stuffed with fireworks and deposited near the Market Hill end. This was quickly extinguished and the effigy confiscated, but the petrol continued to burn for a long time afterwards. A new feature of the scrimmages was the use of police whistles by undergraduates which added to the confusion. (Cam.News)

Ted Hughes – The Life of a Poet by Elaine Feinstein, records the period that Ted Hughes lived in Alexandra House on Petty Cury during the 1950s. It was a place of cheap lodging run by the Women’s Vountary Service.. His poem, Birthday Letters, 1998, written to Sylvia Plath, depicts:

It was somewhere to live. I was

Just having around, courting you,

Afloat on the morning tide and tipsy feelings

Of my twenty-fifth year. Gutted, restyled

A la mode, the Alexandra House

Became a soup-kitchen. Those were the days

Before the avant-garde of coffee bars.

The canteen clutter of the British Restaurant,

One of the war’s utility leftovers,

Was still the place to repair the nights with breakfasts.

But Alexandra House was the place to be seen in.

The girls the helped to run it lived above it

With a retinue of loose lifers, day-sleepers

I got a mattress up there in a top room,

Mattress, on bare boards, in a bare room.

This is a view of Petty Cury decorated for the Coronation of King George VI 1937 taken by J. Baldwin

Petty Cury was made a one-way street in 1925 with the object of relieving congestion in these streets whose narrowness has ever been the subject of discussion [CDN 19th January 1925].

But parking remained a problem:

Sir – When will something be done about the disgraceful state of the traffic in Petty Cury. On Saturday there were 15 large cars parked from Sidney Street to Guildhall Street, and as prams and mail carts can only use the sidewalks, pedestrians who venture on the street are taking serious risks of getting knocked down. Truly a street only fit for the quick or the dead – W.M.F. [CDN 30th July 1947].

It was here that closed-circuit television made its world debut: Traffic scenes on Market Hill were televised to the Accident Prevention Exhibition in the Corn Exchange. ‘Closed-circuit’ as it is called is the latest development of the Cambridge firm of Pye Ltd. Two cameras were operated, one fixed to the balcony of the Guildhall and the other on top of a van at the corner of Petty Cury. Along this narrow, one-way street, between 8am and 6pm approximately 7,000 bicycles and 2,000 other vehicles pass each weekday. [CDN 26th November 1948].

It was to be 1972 before pedestrianisation came. 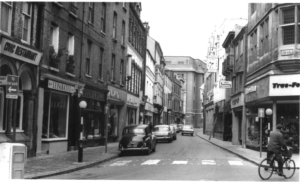 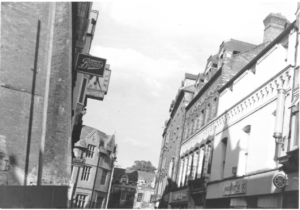 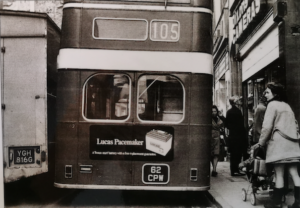 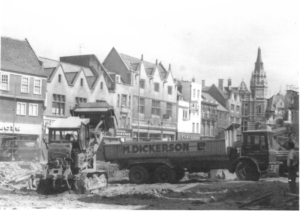 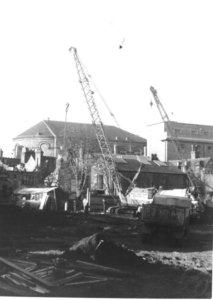 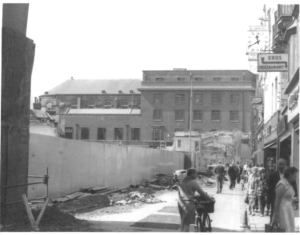 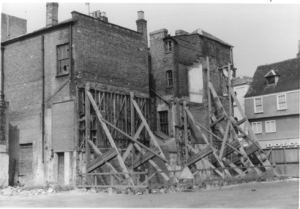 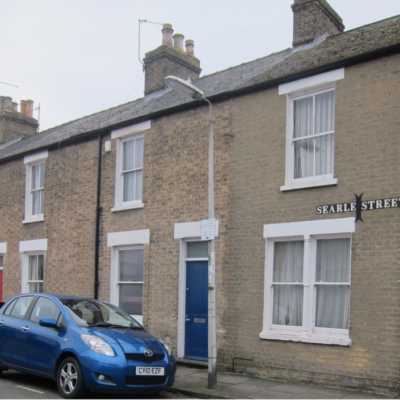