This is the site of Worboys Brewery which was known locally as ‘Sturton Town Brewery’. The house is no longer standing at number 120, and nor is the brewery which had been built on the plots of 122 and 124 Sturton Street with the brewery in the front on Sturton Street and the stables and wagons for delivering kept behind with an entrance on York Terrace. The plot is now a care home/assisted living. 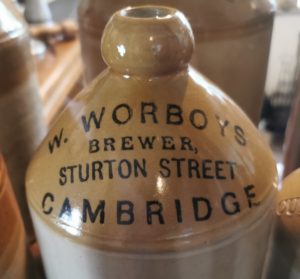 Head of household on the 1881 Census is William Worboys.  He is 37 years old and works as a brewer.  The census records that he employs one man.  William was born in Bedford.

He married Hannah Porter on the 6th October 1870, and the couple have three children.  Florence Jane (8), Robert William (4) and Frances Minnie Porter (8 months).  William is doing well, and the family have a general domestic servant.  Ruth Woods is 18 and from Hunstanton in Norfolk.

In 1884 Hannah and William had another son, James Ernest.  James died on the 10th December 1884 aged just 9 months.  He is buried in Mill Road Cemetery.

Ruth Woods is still employed as their Domestic Servant.  She marries Harry Smith in 1892 and lives at 31 Sturton Street between 1901 and 1911.

Robert married Annie Scott on the 3rd August 1897.  He was 21 and she was 25. In 1901 the couple are living on Coldham’s Lane with their two year old daughter Doris.  Robert is a brewer like his father.  Florence is staying with them on the night the 1901 census is taken.

William and Hannah have a new domestic servant on the 1901 census. Harriett Lansley is 28 and from North Ledgeworth in Wiltshire.   She married carpenter Herbert Hayles in 1909.  The couple lived at Llanfair, Cherry Hinton Road.

“OBITUARY – The death of William Worboys, 120 Sturton Street, occurred yesterday morning.  Deceased, who started in business as a brewer in Sturton Street over 30 years ago, was 61 years of age.  He was well known as a kind and generous man, who concerned himself chiefly with his business, and took no particular part in public affairs.  He leaves a widow and three children, with who much sympathy is felt.” Cambridge Independent Press 23 December 1904

“FUNERAL – The funeral took place on Tuesday, of Mr. William Worboys, who for many years carried on a brewing business in Sturton Street.  The ceremony, which took place at the new cemetery in Newmarket Road, was conducted by the Rev. J. Hargrove.  A large number of friends and sympathisers attended.” Cambridge Independent Press 30 December 1904

Frances married bootmaker Herbert Charles Banham early in 1907.  Frances died in 1909.  Herbert, now a motor coach builder, can be found on the 1911 census living with Hannah Worboys, a cook and a scullery maid at 39 Cam Road.  Cam Road no longer exists, it was demolished when the Elizabeth Way bridge was built.

1908 – 1913 Thomas Solly Coleman is listed on the Electoral Register as living at 120 Sturton Street between these dates.  However, at least on the night of the 1911 Census, he is living with his cousin, Percy Tilmans, at 39 Glisson Road.

“Cambridge Municipal Elections.  New Candidate In St. Matthew’s Ward. […] The new candidate is Mr. T. S. Coleman, of 120 Sturton Street, and he disclosed himself by issuing his address to the burgesses of the Ward this week.  Mr. Coleman is a comparative stranger.  He purchased the business of the late Mr. W. Worboys, brewer of Sturton Street, two years ago, and is known by his friends as a good “sport”, but he has never gone in for public life before, and has never taken any part in Cambridge politics.  He was adopted at a meeting of the Conservative party in the Ward last Friday.” Cambridge Independent Press 18 October 1907

“Harriers – England.  Cambridgeshire. – Mr. T. S. Coleman of 120 Sturton Street, Cambridge, replaces Mr. R. Brassey Jones as secretary.” The Field, The Country Gentleman’s Newspaper 16 October 1909.  From the same publication “The harrier packs happily show no falling off in number […] and show that the love of healthy outdoor sport is as strong as ever in this country. […] and those who are unable to afford the expense of following foxhounds can find plenty of amusement in the hunting of the hare.  This form of sport is far older than foxhunting.”

Vivian Haslewood is 31, head of household and the Brewery Manager.  He was born in Ipswich and is married to Anne Jane (nee Hodge), who is 40 and from Ipplepen in Devon.  The couple have an 18 month old son named Francis.

The family has a servant, Phoebe Burton, who 24 and from Cambridge.

The Cambridgeshire Electroral Registers show that the Haslewoods were only resident at 120 Sturton Street for about a year before moving to Devon.  Vivian is also registered at 24 Rowley Road in Torquay in 1911.

The Cambridge Independent Press reported on the transfers of licenses on the 4th of July 1913 “Worboys Brewery, Sturton Street, from Thomas Solly Coleman and William Walter Myers to Robert Brassey Jones.”

1914-15 the electoral register records Robert Brassey Jones resident at 120.  Robert is mentioned above when Thomas Coleman took over from him as secretary of the Cambridgeshire Harriers.  Robert was born in Denbighshire, Wales in 1867.  His wife is called Annie and they have a daughter named Nancy.  The family previously lived at 105 Blinco Grove.

“The Lighting Order.  Prosecutions at Cambridge. […] A Reasonable Explanation.  Mr Harry Sidney Buckley, grocer’s manager of 120 Sturton Street, was summoned that on February 21st at 8.30pm, he did not screen a sitting-room window at 120 Sturton Street.  Defendant pleaded guilty.

Mr. Walter John Prior, special constable, stated that when on duty on Monday he saw a bright light coming from 120 Sturton Street.  He went closer and saw that there was a light in the sitting room and the Venetian blinds were down, but the light was coming from between the slats. […]

Addressing the Bench, the defendant said that the house was unoccupied at the present time.  He intended to occupy it, and had been doing a little work there.  The night before this night was the first time a light had been there.  He went into the room on the night of this summons with a friend to get some things, and he turned on the light, noticing that the blinds were down.  When the special constable knocked on the door he went out to him, and while they were standing in the garden his friend, noticing the slit in the blind, put the slats right.  Since then he had put up some thick curtains.

The Mayor: We are so satisfied with the reasonableness of your explanation, that we are willing to withdraw the summons on your payment of costs.” Saffron Walden Weekly News 03 March 1916