The Malt and Hops Inn

Number 26 is a corner property on the east side of Ainsworth Street.

The Malt and Hops at No. 26 is first seen as a pub on the 1881 Spalding Directory of Cambridge. On the 1878 directory, the owner, George Gilbert is listed as a grocer suggesting that at the time, the pub began it’s life as a shop.

The Gilbert’s are living here in 1881 with their three children, Beatrice Jane, 6, Florence Louise, 4, and Elizabeth Grace, 2 and the Grocer’s apprentice, Henry B. Prime, aged 18. George, 34, is listed as a “Brewer and Grocer,” the same as the 1881 Spalding Directory.

They have definitely lived on Ainsworth Street since their wedding on the 10th April 1872, the newspaper account of the wedding records that George Gilbert is a grocer of Ainsworth Street.  The baptism record of their eldest daughter confirms this.  However, the street is un-numbered in the early 1870s.

In 1873 their first child, Lucy Gertrude, is born.

George applies for a license to sell “Beer, cider and perry” in August 1877.

The 1891 census lists this property as “The Malt & Hops Inn,”George and Susanna are still living here, with George now listed as ‘publican’.  Such was the popularity of the Gilbert’s pub, that Stone Street is sometimes referred to as ‘Gilbert Street or Stone Street’ on  maps from this period, suggesting people locally used the name Gilbert Street.

The Gilbert’s now have five children, sadly, Lucy has died. The eldest living at home was Beatrice, aged 16, a drapers apprentice. This meant she worked with cloth, presumably in a shop, selling textiles and other materials for sewing fabric, for furniture or clothes, for example. The four younger children are at school.  Florence is now 14, Elizabeth is 12, George Artemus is 8 and Henry is 6.

24th May 1893 there is a fatal accident on the railway when George (junior) is playing between the coal trucks. Somehow he wedged his head between the buffers and was crushed.

“The Coroner said it was a sad accident and he hoped it would be a warning to the lads of the neighbourhood.”  It’s pointed out that the railway officials had to constantly put a man on guard to keep the lads off the railway.  They hoped this accident woud persuade parents to talk to their children about trespass and that the railway was private property.

The article goes on to say “It is sad to relate that the deceased boy is the second child Mr Gilbert has lost to accidental death.” There is a suggestion on some Ancestry.co.uk Family Trees that Lucy died when she fell into a vat of beer and drowned.  This could be confirmed by ordering Lucy’s death certificate.

At the time of his son’s death George Gilbert is being referred to as a “Brewer and mineral water manufacturer”.

George Gilbert last appears on the Electoral Register for Cambridge in 1897 and the 1901 Census shows them living in Rotherhithe.

Elizabeth marries Bootmaker Percy Fortin (he grew up on Gwydir Street) in 1905 and they move to Leighton Buzzard.   They name their eldest son “Gilbert” and their second son has the middle name “Artemus”.

By 1911 George Gilbert has died and Susanna is living alone in East Ham. She dies in 1912.

In 1901 the residents of 26 Ainsworth Street are the Wilden family, and there is license still for The Malt and Hops.  Albert Wilden, 43, is a Licensed Victualler from Kent and he likely came to Cambridge to run the business.  His wife, Jessie, 37, from Middlesex in London has her occupation listed as Sick Nurse, so she is working from home and in residents’ homes, also possibly at local institutions like the infirmary on Hooper Street, or the workhouse on Mill Road, or the infectious diseases hospital at Brooklands.

At home the Wildens have one child living with them, Florence, aged 17, who was born in Reading, Berkshire. She has no occupation listed, so is likely helping her working parents run their household and the pub downstairs. 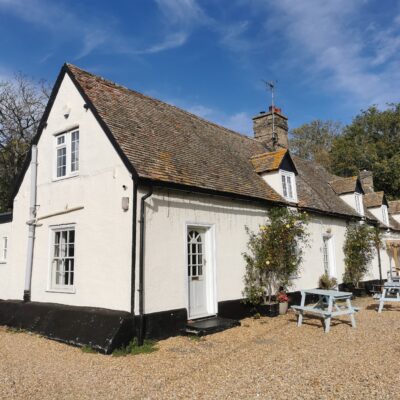