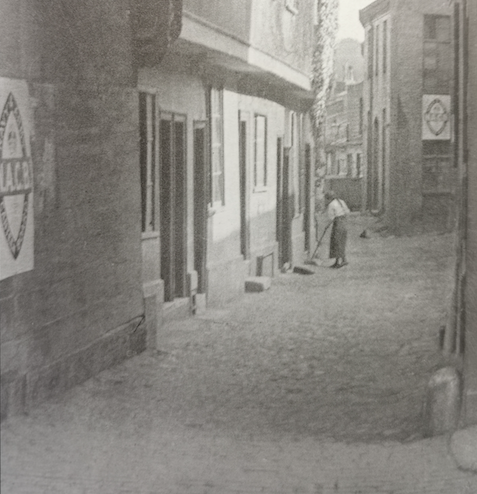 1959 Royal Commission on Historical Monuments Survey of Cambridge: Nos. 1,2,3,4, and 4a Jordan’s Yard, forming a range of dwellings pf three stripes with cellars, with plastered timber-framed walls and tiled roofs, continue and are of the same build as Nos 15 and 16 bridge Street….. Generally the buildings contain a quantity of 16th and 17th cent.panelling, some in No.1 in situ, and plain 18th cent. fittings.

No.5 Jordan’s Yard…has plastered timber-framed walls and tiled roofs. The E part is of the 17th century; in the 18th cent. the W part was built between the foregoing and 4a Jordan’s Yard.

This was an alleyway, perpendicular to Bridge Street, between nos. 13 and 12.

Benjamin Jordan was a livery stable-keeper in the first half of the 19th century. In 1861 when up for sale there were five houses in the yard, a farriery, a smithy, a farmyard and a garden, and stabling for 50 horses. the fifth house was the home of Professor Mayor, president of St John’s College. (J.H.Bullock – Bridge Street, 1939). In 1904 his neighbours were a bedmaker, a blacksmith and a painter.

There were 13 addresses there:

On the night of 27th July 1941 the repair shop of Allin’s Garage at 5 Jordan’s Yard received a direct hit from a 250 kg HE bomb which caused the collapse of adjoining houses.