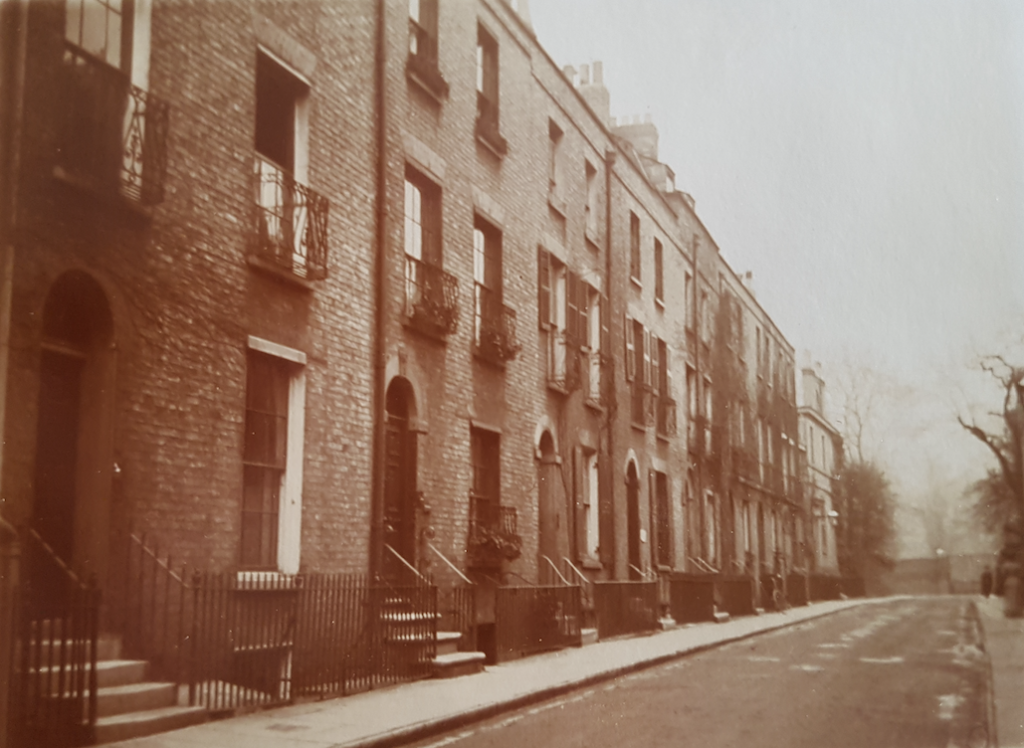 1840s: The house was owned by Josiah Chater’s uncle, William Adams. On most Sundays Josiah and his brother had tea and supper here. It was through the uncle that Josiah and William had come to Cambridge. He was generous and provided them with all their clothes during their apprenticeships.

William had been born in Haverhill in 1776 but educated in Chesterton. He used to visit a distant relation by marriage, Mr Simpson, a draper, in Cambridge, and he started to work for  Mr Simpson, in due course becoming a partner and then marrying his daughter. He became sole manger of the firm in due course, made a success of it and was able to retire fairly early in life to devote himself to charitable work and his duties as a deacon of St Andrew’s Street Baptist Church.

Mrs Adams was ailing and told Josiah that she hoped Josiah and Agnes would live in the house after her death. On 27th October  she gave Josiah detailed instructions about legacies and her ways of managing the house.

In January Mrs Adams’s sister, Harriet Simpson, died. On the day before her funeral, Josiah visited the Adams family vault at the Histon Road cemetery. This was where, not only Mrs Adams but also  Josiah and his wife Agnes were to be buried in due course.

The house passed to Josiah Chater on the death of William Adam’s widow. Victorian Cambridge states that by October 1860 the family had moved to 19 Fitzwilliam Street, but the  1861 census still records them living at 20/21 Sidney Street.

Josiah Chater moved his family into their new house on 1st January.

Josiah recorded that he had a fire lit in his new greenhouse. He had built and glazed it himself. To access his garden he used a path from the Little Rose Inn next door.

Josiah extended the house adding a cellar and three attic bedrooms. The work was carried out by Charles Taylor of 10 Tennis Court Road.

Josiah wrote  how his greenhouse caught fire about 11pm on 31st December.The fire spread to the summer house but they managed to put it out by 1 in the morning. In the same entry Josiah refers to the rockets which were fired every New Year’s Eve from the open space in front of King’s College. The custom was started by Isaiah Deck of 9 King’s Parade.

Ethel A, 16, merchants clerk, b Chesterton

Millicent A, 10, b Cambridge

In 1874 the Chaters engaged a young unmarried girl as nursemaid named Hannah from Bishop’s Stortford. The day after her arrival Agnes told Josiah that she was sure Hannah was pregnant. Josiah refers in his diary to many families who have sacked servants in this condition but the Chaters allowed her to stay. On the 20th October Hannah gave birth at short notice; although the baby was well, the mother’s state deteriorated quickly. On the 31st October Hannah died. Josiah travelled to Bishop’s Stortford to see Hannah’s father about both a coffin and also how to get the baby from Cambridge.

1877: Josiah started a new career as an accountant, first as Chief Accountant at Alex MacIntosh‘s establishment. From 1877 to 1883 a number of local businesses failed and in many cases Josiah was appointed trustee or receiver. One piece of equipment that help him was a duplicating device called a paypyrograph. 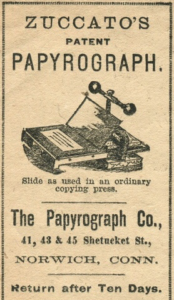 Mary A Barnard, servant, b Melbourn