History of St Mary the Great

General information about this church can be found on Wikipedia. Particular features of the church are its bells, and its two organs. Martin Bucer (1491-1551), Protestant reformer is buried there. 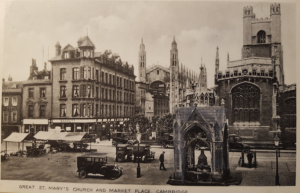 The tower was built nearly a century after the completion of the rest of the church during the Wardenship of John Warren. He fell to death from the summit of the tower on its completion. 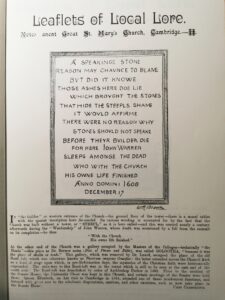 The chimes of Great St Mary’s were first played. Traditionally ascribed to William Crotch, they are taken from Handel’s Messiah. Crotch came to Cambridge to study in 1783. However, some attribute the composition of the chimes to Dr Jowett, Regius professor Law. (See Leaflets of Local Lore, Urbs Camboritum) 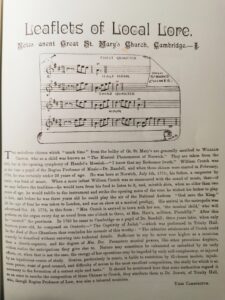 28/5/1898: There was but little crush as the stream of mourners poured from all quarters of the town into Great St Mary’s Church for the Memorial Service to Mr Gladstone. A subdued calm seem to fall like a veil over the centre of Cambridge as the bell tolled forth its tail of loss to the nation, and a hush, as it were, of the chamber of death seemed even to spread itself over the busy market place. Quietly the people filed into the Church and stepped into the first empty pew; none stopping to haggle for a seat. Even as the doors were being closed, as the last bars of the echoing National Anthem waned to science, latecomers yet found room in one or other of the galleries, and no one was turned from the Church (Cam.News)

24/11/1898: Great crowds had been assembling outside Great St Mary’s and the railings before the Senate House with the exception of a pathway of about five yards which the police were endeavouring to keep clear for those attending the honorary degree ceremony for Lord Kitchener. It was evidence that the constables were having hard work in keeping the crowds from encroaching. At length the looked-for rush took place and such was the force that the police were quite powerless to check it. A general scramble to get upon the railings ensued when without the slightest warning the railings suddenly gave way and fell outwards carrying many unfortunate persons to the ground with them. The solidity of this great piece of ironwork is well known and it is wonderful that more were not seriously injured. (Cam.News)

22/1/1904: Discussion about site for War Memorial, one suggestion is at junction of Hills Road & Station Road, finally decide to erect it at East end exterior of Gt St Mary’s church (Cam.News)

13/6/05: The memorial to the Cambridge men who died during the South African War was unveiled at Great St Mary’s Church. It is not inside the church but looks out upon the Market Place, seeming to say that in the midst of life we were in death. A guard of honour consisting of a hundred men of the Cambridge Town Volunteers together with a detachment of the Suffolk Militia, a dismounted body of Hussars, Cambridge University Rifle Volunteers and the band of the Scots Grays joined old soldiers who had seen service in South Africa to witness the proceedings (Cam.News)

17/06/1905: The unveiling of the South African war memorial was marred by two small incidents. The Mayor of Cambridge was without his trusty mace-bearers – apparently the maces were securely locked up and the individual who holds the keys was not to be found. Then police failed to recognise the military veterans and refused them admittance to the ceremony to which they had been invited. There was a considerable amount of confusion until the constables were enlightened as to the nature of the guests and allowed them to pass. (Cam.News)

15/9/1934: Extensive repairs are being carried out to the roof of Great St Mary’s church. Once again the cause is the death-watch beetle whose activities in the wooden beams have wrought tremendous havoc. The area around the chancel is in ‘splints’ with steel scaffolding but services are being held as usual. The church has only recently been cleaned and the organ renovated. One can only hope the ravages have been checked before they could cover the whole of the roof. (Cam.News)

The Monty Python Bishop and the Suez Crisis in Cambridge – 1956 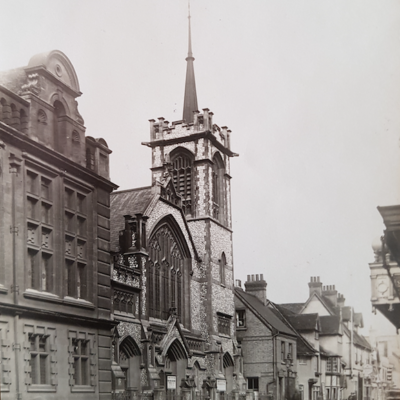