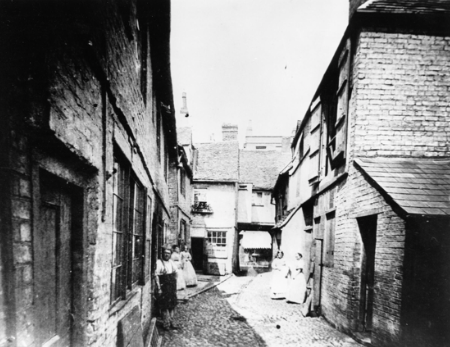 The pub / hotel was demolished in 1969. There was a separately licensed Tap in the 19th century.  From about 1851 it was just referred to as the Lion Hotel. It is known to have been in existence from at least the early 16th century.

According to 1959 Royal Commission on Historical Monuments Survey of Cambridge the building was of three and two storeys with attics. The walls were plastered timber-framing and brick. The old yard had by 1959 been covered with a glass roof. It was the only inn in the city showing a continued retention of both use and courtyard from at least the 17th cent. None of the surviving buildings in 1959 were earlier than the 17th cent. but a probable medieval origin had been argued.

Became a terminus for the London to Cambridge stagecoach

the English cholera is now raging in this town and several persons have died of it, one a waiter at the Lion. He died in a few hours.

1855: around this time one of the first performance of the Amateur Dramatic Club was given at the Red Lion. This was at a time when the club had only just been formed by A C Burnand, a Trinity undergraduate and was still looking for a permanent home. It was soon after this that a site was found at The Hoop in Jesus Lane

1886: See photo. This has been described as Red Heart Yard looking out onto Petty Cury, but the location of a ‘Red Heart’  at this location seems doubtful. It is more likely to have been the Red Lion Yard.

Frank, 22, manager in hotel, b Cambridge

The Lion Yard became ‘the Armoury’ in 1890s when the Drill Hall of the Cambridge Regiment was built in Corn Exchange Street.

There were some delightful people among the University Belgians. I remember in particular the Dejace family from Liège where Monsieur Dejace was a professor of Law. His eldest daughter, Manette (long since Madame Paul van Gehuchten), has written me a short account of how she, with her parents and younger sister, cam e to live in Cambridge. Both her brothers remained at military camps in Northern France as volunteers training for the Belgian army…. On 15th November a party for Belgian refugees was given to celebrate the Belgian King’s birthday. Manette, a good musician, was immediately installed at the piano to play the accompaniments to the Brabançonne and other patriotic songs. (E M Keynes, A House By The River, p187)

It was a grievous blow to all who knew [professor] van Gehuchten and his work when, only a few weeks after his arrival, he fell suddenly ill and died a few days later at the Research Hospital. His son Paul had been fighting in the Battle of the Yser as a volunteer with the Belgian Army when, on account of his father’s grave illness, he was recalled and sent over to Cambridge.He arrived however only in time for the funeral. He did not return to the army afterwards as special arrangements were made for him to continue his pre-medical training at the First Eastern General Hospital. This enabled him to qualify after a few months. He rejoined the Army as a doctor early in 1916… In 1919 he and Manette Dejace were married in Belgium but their marriage remains closely connected with Cambridge.

Siegfried Sassoon and his friend David Thomas were regulars at The Lion during their time of Officer training at Pembroke College in the summer of 1915. (info supplied by Anne MP).

The Armoury became a kitchen garden.

In his letter home from York, 9/7/1927, Giuseppe Tomas di Lampedusa (author of The Leopard) wrote:

“In Cambridge [I] put up at the Red Lion, which was doubtless the model that inspired Dickens with the  nocturnal blunders of the great Pickwick though the maze -like intricacies of a corridor.”

The back of Lion Yard developed into first Lion Yard car-park. 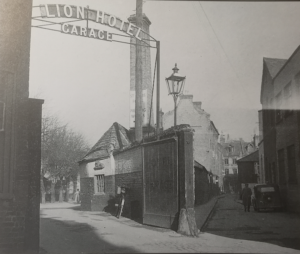 Vanishing Cambridge by Mike Petty notes: A reporter commented, On market days its spacious yard resounded to the echo of hundreds pf hooves and of the wheels of carts and carriages. Today its yards are filled with cars and the stables are no longer required.

Mrs A A Moyes had built up its reputation: Her charming pleasant nature was well-known by countless visitors. She died in 1922, leaving the hotel to her daughters.

PH recalls that the bell ringers of St Andrew the Great used to repair to the courtyard of the Red Lion for drinks, which was then roofed with glass.

“The walls flanking us were therefore external walls with doorways and entrances off the yard. We were always intrigued by the sign by one of them which read “Ostler” and were mischievously tempted to knock on the door and invite him to come and ostle before us so we could watch.

My other memory of the Lion is that when my parents came to visit they once stayed at the Lion. We noticed that the cash drawer of the pre-payment electricity meter in their room was half open and opened it out of curiosity. It proved to be packed to bursting with pound coins and clearly hadn’t been emptied for many months if not longer.

All part of the atmosphere of the place and I greatly regret its demolition.”

The hotel closed in 1963 and was demolished for the Lion Yard shopping centre.