Gone first was the ‘Blue Barn’ Restaurant, an aged two storey building in Ram Yard removed by a 250 kg HE.

The suggestion of demolishing this narrow thoroughfare was made as far back at 1900. W. wrote in the CDN 19.11.1900: I refer to the buildings situated between Round Church Street on the one side and Ram Yard, looking into Park Street on the other. Here is a collection of bricks and wood in the shape of miserable cottages, bar the way to what might be a worthy continuation of Trinity and St John’s Streets to park Street, bringing into touch one of the busiest parts of the town. It is only a matter of a few hundred pounds to buy these cottages and I am sure that were the owners approached they would have sufficient patriotism to let their property go for a consideration.

Lincolne and Son’s and Holden’s Stables 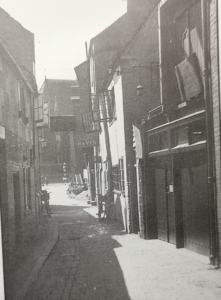 Ram Lane was finally demolished in 1961 to provide access to the new Park Street car park that opened in October 1963.