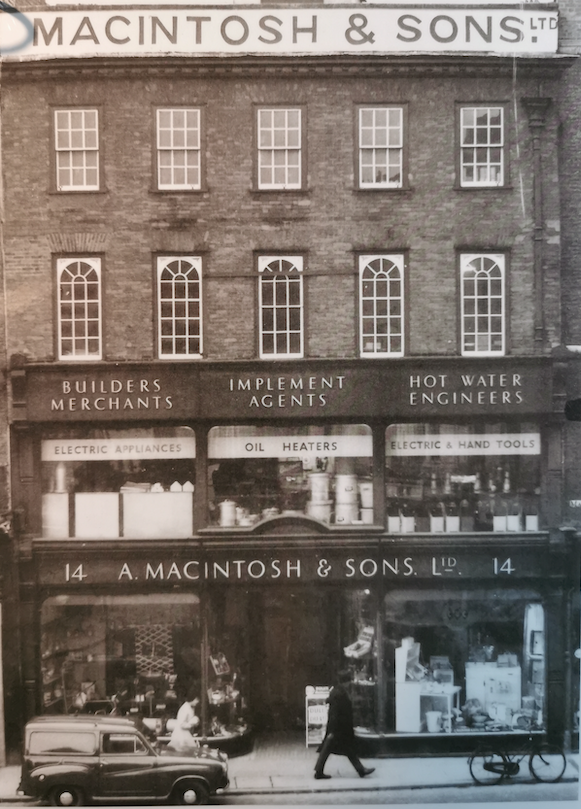 According to 1959 Royal Commission on Historical Monuments Survey of Cambridge, a four storey house. The south front an early 18th century remodelling  and heightening of an earlier structure. In the process the carriageway, presumably to the Angel Inn as shown in William Custance’s map of 1798, was destroyed.

The ironmongery here was founded in 1688. When Swann Hurrell took over the business from his uncle in 1847 he moved the foundry to a disused brewery on Quayside.

Swann Hurrell was succeeded by his nephew Edward Beales.

(occupied as a shop)

Alexander Macintosh bought the bankrupt ironmongery business of Edward Beales and moved to 14 Market Hill. They already hand premises at 21 and 23 Market Street, 2 Sussex Street, 49 Sidney Street and 54a Hills Road. At about this time they also bought the Thompson’s Lane Foundry. 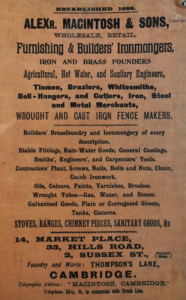 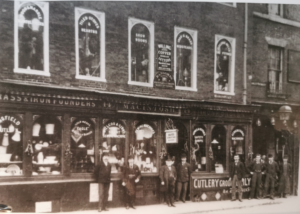 In this year the Macintosh shop front was renewed.

[He had lived previously at 35 Bridge Street. He was living at this address at the time of his marriage in 1906 and then moved to 109 Mawson Road.] 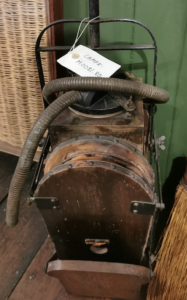 5/2/1930: The novel sight of people being lowered from an upper window of Messrs Macintosh’s establishment in Market Street Cambridge by means of a new automatic fire escape has attracted considerable attention. The escape consists of a small metal box containing geared mechanism through which runs a steel cable with a safety belt fixed at each end. It can be fixed to the wall inside the window. The belt is placed round the body, under the arms and the person is lowered to the ground automatically at the rate of two feet per second. Most of the colleges have been equipped with it. Anybody desirous of testing the escape can do so and already a number of people, including one of the CDN photographers have done so. (Cam.News) 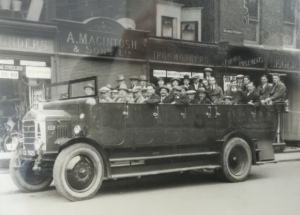 A Macintosh bought 14A Market Hill from Eaden Lilley

A Macintosh & Sons Ltd, ironmongers. The firm went into voluntary liquidation in this year.

Premises were demolished soon after