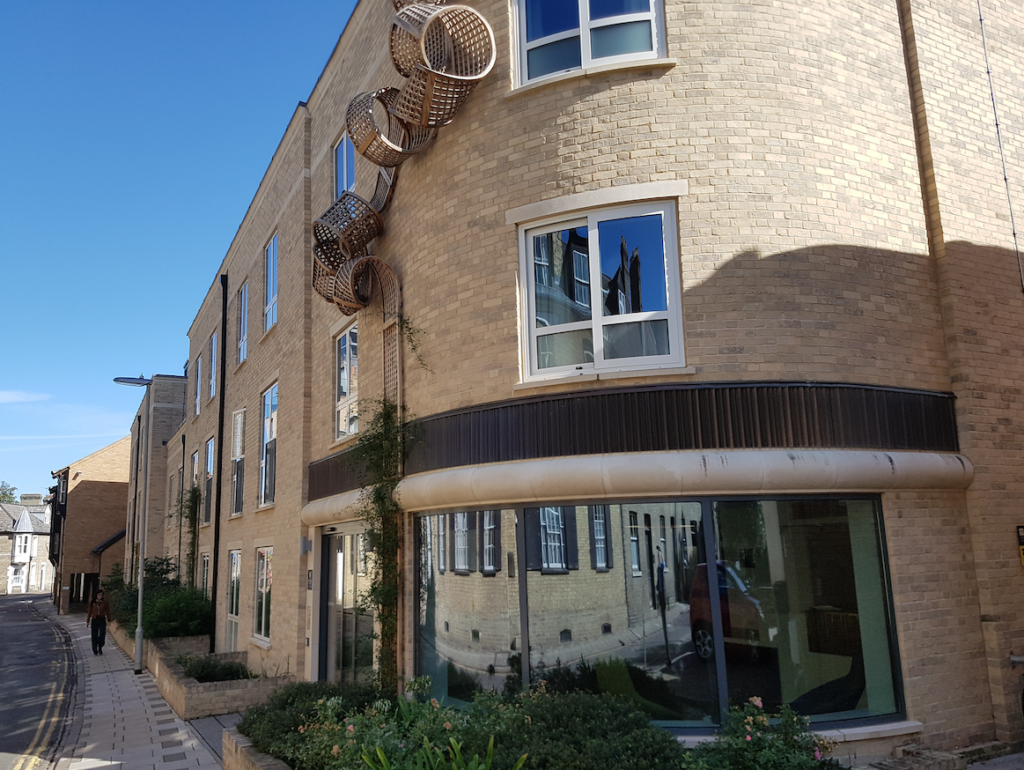 Thompson's Lane south side in 2019

This entry involves the area that became the Ironworks, previously the Thompson’s Lane Brewery. Information is from T E Faber, An Intimate History of St Clement’s Parish, 2006.

Sabina Hubert (or Huberd) was living in 1279 in the property which had previously belonged to her husband Robert (son of Hubert, son of Norman), but which she held for life only from her brother Bartholomew Gogging (or Cogging). She owed 4s p.a. rent to the Hospital of St John. the core of her estate seems to have been composed of elements described in three undated 13th cent. grants. (Faber p. 115):

The history of the site around the time of the Black Death is very unclear. For several years up from 1353 until at least 1371 it seems no rent was paid on the property.

T E Faber argues that from 1463 there is evidence that the land was in the tenancy of John Heskethe and that this had been organised by William Dak, a well-connected lawyer as well as a priest in order to help St John’s Hospital make some income after a century of upheaval following the Black Death.

1483: town exerted its rights over the area for the first time, granting William Cappe a lease. Cappe then built on the site, resurrecting, perhaps, the ancient brewhouse of Hubert son of Norman.

1490/1: in order to compensate the Hospital of St John, William Dak gave up part of his land to Alice Bell. The rent of 20d was paid to St John’s Hospital by Alice Bell, sometime wife of Thomas Bell [tenant of Sedge Hall 1486-89].

1495: William Dak died and his great tenement was acquired by William Cappe. It then seems to have to have passed to Hugh Rankyn and then Hugh sold or gave it to his younger brother Jeffrey.

1543: Geoffrey died childless and left to his nephew Gerard a tenement ‘sett and buylded in the same paryshe of Saint Clement at the corner leading towarde Harlestones place commonly called the corner howse wherein Wylliam Smythe pewterer nowe dwellythe.’ ‘Harlestones place’ was the same as the Harlston Inn [site of Anchor brewery], on the east side of Quayside Inn. The corner house was probably where no. 29 Thompson’s Lane stood in 1886. Jeffrey left two other properties to Gerard: ‘my mansion howsse or tenement called the tabere in the which tenement I now dwelle with all the yards and other appurtenances to the same belongyng‘, and another which T E Faber could not identify. This mansion house he identified with the location no. 30 Thompson’s Lane.

1547: Gerard Rankyn probably sold the whole property to Christopher Hodgeson (Hodson) who in 1547 left to his son Henry ‘my tenement which I bought of Jerrarde Rankyn lyeing in the Harstons lane.’

1568: Henry Hodson died. He is known to have lived in a house in Harleston lane which he left to his own son Christopher. Henry owned a brewery at the time of his death.

1609: Death of Thomas Cropley ‘victualler’, who came from a prosperous Ely family and died a rich man. He had married Ann, one of Henry Hodgeson’s daughters, at St Clements in 1586. He left his property to Ann.

1613: It seems likely that Roger Thompson the brewer bought the site off the Cropleys soon after the death of Thomas. In 1613 he agreed a new lease with St John’s. By 1618 he had built a new brewhouse lying parallel with the river. He was granted a new town lease for 80 years at an annual rent of 3s. It is known he supplied beer to several colleges.

Roger Thompson made his will in 1642. His successor as manager of the brewery was his brother Hugh. However the ownership of the family estate was to pass to Roger’s grandson, also called Roger [III}.

Roger III built a new house for his family circa 1674. It can be seen on Loggan’s 1688 map of Cambridge. It stood on the the corner of Quayside Lane, occupying the later site of no.29 Thompson’s Lane.

Roger III died in 1715. His son Roger IV went to live in Rickmansworth and Mr Sparks leased the brewery and went into business with Thomas Ewin.

1766/67 rental records show ‘Thompson now Ewin and Sparks’ with ‘Mr Gillam’ written alongside. It seems that Roger Thompson IV’s widow held onto the freehold of the brewery until her death and it was then sold to John Gillam, brewer, c 1767.

Gillam rebuilt the brewery and added to the estate a lease of an inn in Bridge Street called the Barley Mow which he was granted by St John’s in 1776.

1782/3: Gillam’s heirs sold out to John Purchas. John Purchas [II] the elder died in 1787 and his son, John [III] took it over. John III acquired more land in the area including the freehold of the barley Mow. However it seems that he overreached himself financially and had to surrender his properties gradually to Thomas Skeels and William Hollick.

1803: properties released by William Hollick to Richard Foster for £16,000. These included the Barley Mow and the Black Swan in St Mary’s parish.

The Fosters remained in possession of the brewery for over 50 years and the amount of property attached to it grew significantly. When ‘The Thompson’s Lane Brewery’ was put up for sale by auction in 1859, the central site was only one of 74 lots; most of the remained were freehold and leasehold inns and houses around Cambridge. They owned no. 7 Thompson’s Lane, no. 30 which was the principal dwelling house attached to the brewery occupied in 1859 by Henry Staples Foster, and no. 29 lately occupied by Richard Foster who was probably the same Richard living in the house in 1803.

1838: Brewery supplied 6 barrels of beer for the Coronation Feast.

1859: the brewery site was purchased by Swan Hurrell who created an iron foundry to replace one previously on the west side of Bridge Street in Foundry Yard. Foundry Yard was on the site of later St John’s College Master’s Lodge.

1893: foundry at this time is leased to Alexander Macintosh; no trace of the brewery remains.

1923: foundry was bought by MacIntosh at some point and continued in that name until closure in in 1923. At this point Magdalene College acquired the freehold.