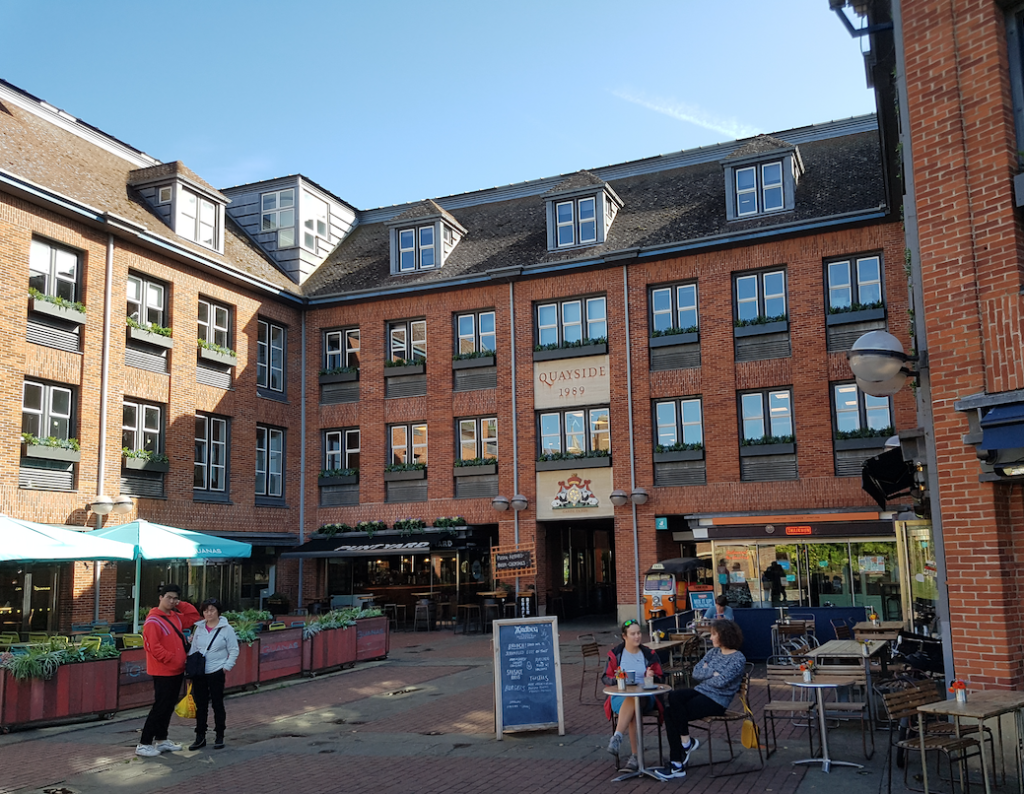 Peter Bryan ( “Cambridge – The Shaping of the City” 2008) notes that there is evidence of Danish traders from c. 900AD living in the Quayside area, which was known as the Hulme, a Danish word indicating an island in a marshy area. It seems likely that they were Danish traders who had come from Ireland. The Liber Eliensis refers to Cambridge in the 10th century as a port of the same rank of importance as Norwich, Ipswich and Thetford.

The earliest (c. 14th cent.) buildings known on this site were two cottages on strips (c) and (d) which belonged to one of St Clement’s chantries. There were two more cottages near the Bridge Street entrance to what became the Half Moon Inn.

Shortly before 1547, under threat of confiscation by the king, they were all included with the chantry house and the White Bull in a last-minute lease to George Parker; around 1548 they were granted along with other chantry estates in and around Cambridge to Sir Thomas Wendye and John Barton.

There was also a west facing house on plot (2) but no houses on (3) and (4). At (3) and (4) there was a yard associated with (2) and by 1573 at least one warehouse in the yard. Previously in the 16th cent. the yard had been used for cooperage and/or brewing, initially by John Ford of St Clement’s who died in 1521. John Ford left the property to his wife Eleynn for her life and then to his son Thomas. the widowed Mrs Ford married Thomas Bell [perhaps the son of Thomas Bell who rented Sedge Hall from Corpus in 1486 and Alice who rented a garden from St John’s in 1490] but her second husband died 6 months after the marriage. ten years later Eleyne died and left her son Thomas ‘my brewhouse in which William Browne is now dwelling. the following year Thomas Ford died leaving the brewhouse to his wife Alis. (All three Fords asked to buried in the chapel of St Nicholas in St Clement’s Church, a chapel which was described as new in 1521.)

For most of the 19th cent. the west facing building of the Half Moon were deemed to be Quayside rather than Bridge Street.

Plot (2) on map: public house, formerly the Black Boy and then the Anchor 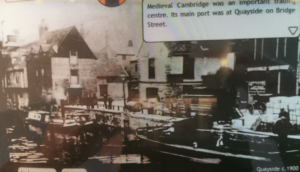 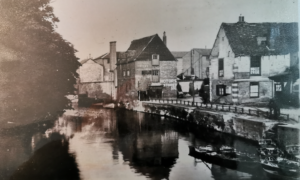 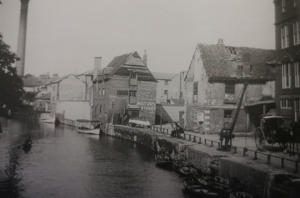 The K6 telephone kiosk is a milestone of C20 industrial design. The K6 was designed by Sir Giles Gilbert Scott in 1935 for the General Post Office, on the occasion of King George V’s Silver Jubilee. The K6 was a development from his earlier highly successful K2 telephone kiosk design of 1924, of Neo-classical inspiration. The K6 was more streamlined aesthetically, more compact and more cost-effective to mass produce. Sir Giles Gilbert Scott (1880-1960) was one of the most important of modern British architects; his many celebrated commissions include the Anglican cathedral of Liverpool and Battersea power station. The K2 and K6 telephone kiosks can be said to represent a very thoughtful adaptation of architectural tradition to contemporary technological requirements. Well over 70,000 K6s were eventually produced. In the 1960s many were replaced with far plainer kiosk types. But many still remain, and continue to be an iconic feature on Britain’s streetscapes.

The K6 telephone kiosk at Cambridge has a strong visual link with a number of Grade II listed buildings, including Magdalene Bridge, no. 31 Magdalene Street and the Pickerel Inn.

1939: J H Bullock, Bridge Street, 1939 – Cambridge Public Library: there were quays and warehouses on both banks of the river and on both sides of the bridge. To these quays came everything needed for the life of the district by barge. By far the greater part of the goods were landed at Quay Side. When I was a boy I used to hear when the ‘bridge-porters’ used to prop up the bridge while waiting for a job. 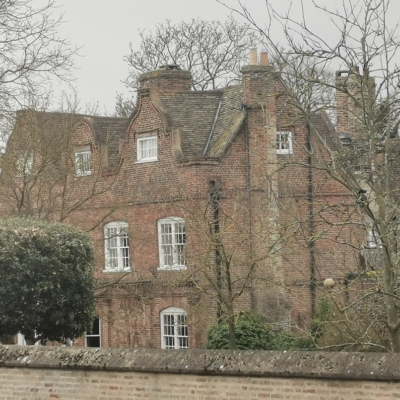 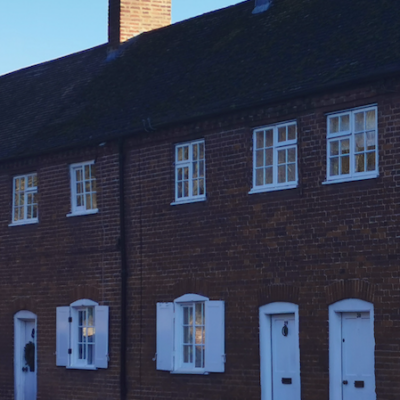