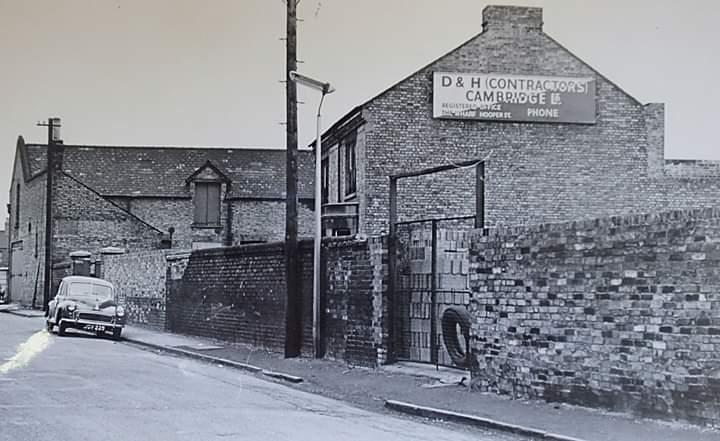 The Hooper Street coal wharf was on the south side of the street, on a site later occupied by Cambridge Women’s Resource Centre and now within the Ironworks housing development. From the 1840s the site was occupied by James Ind Headly’s Eagle Foundry, which also included a coprolite works and a Portland cement works. The premises, along with the house shown in the photo above, were put up for auction in 1887 (Cambridge Chronicle, 1 July 1887).

In 1900 the site became a coal wharf run by Coote & Warren Ltd., a coal merchant based in East Anglia and north London, and operating from the 1850s until 1960. They previously had a branch on Coldham’s Lane, and they had another branch in Hills Road by the railway bridge; see the Capturing Cambridge entry for Coote and Warren’s Coal Wharf, Hills Road.

The house was used as lodgings for the wharf’s foreman and staff. By the 1950s the premises were used by D & H Contractors, and subsequently by Cambridge City Council as a depot for dustcarts. The house was demolished some decades ago, but the perimeter wall shown in the photo was still standing until January 2020.

The first resident foreman was William Casey, who lived there with his wife Hannah. He had previously been the foreman of the Coldham’s Lane branch of Coote & Warren.

In 1911 they shared the house with 12 year-old Ethel Barker, Hannah’s great-niece. Ethel’s parents, Charles and Mary, and five little brothers lived nearby in a very small cottage in Norfolk Terrace. Although described as a ‘visitor’ in the census, Ethel may have come to live with William and Hannah, who had no children of their own.

The local papers of 1907 (Cambridge Independent Press, 26 April and 24 May 1907) reported a curious legal case concerning William Casey. He had been sued by Henry Prior, an insurance agent, for £2 damage to a bicycle. Prior had been cycling down Hooper Street when ‘a dog rushed at his right leg, and then got in front and went for his left leg, and he became so occupied with the attentions of the dog that he did not notice a baker’s cart, which turned into the street from Ainsworth-street, and the consequence was that they collided.’ The horse then trampled on the bike, causing the damage. William Casey initially offered to pay for at least half the repair cost, but when he saw the bill he refused. After all, the damage had been caused by the horse and cart, not the dog.

The legal arguments centred on the nature of the dog. By the precedent of cases in which a dog caused an injury, the owner would be liable if he knew that the dog was dangerous. However, Casey testified that ‘the dog was a small fox terrier, which he had had between three and four years, and kept as a pet … His little girl took it out, and it followed her like a lamb. Hundreds of railway men came through his yard to get to their work, and the dog, which was of a quiet disposition, had never offered to touch any of them.’ The judge ruled that Casey was not liable.

In 1911 William and Hannah also had a boarder, Herbert Ashman, another employee of the coal wharf. Herbert was born in 1886, the eldest of four sons of Arthur and Belinda Ashman. Arthur was a coal merchant and, in 1901, the publican of the Railway Inn, Pampisford. Herbert went into the coal business like his father. In 1913 he was foreman of the Coote & Warren coal wharf on Hills Road, and in 1914 he was married. In the First World War he joined the Royal Garrison Artillery and was killed in action in 1918, leaving a widow, Ellen, and a baby daughter he had not seen since she was a few days old (Cambridge Daily News, 11 October 1918). Two of his brothers, Edward and Frederick, were also killed in the war. The three brothers are commemorated on the war memorial in Pampisford churchyard.

In 1953 the premises – still known as the Wharf – became a scrap metal yard. By 1965 the Wharf was used by D & H public works contractors.