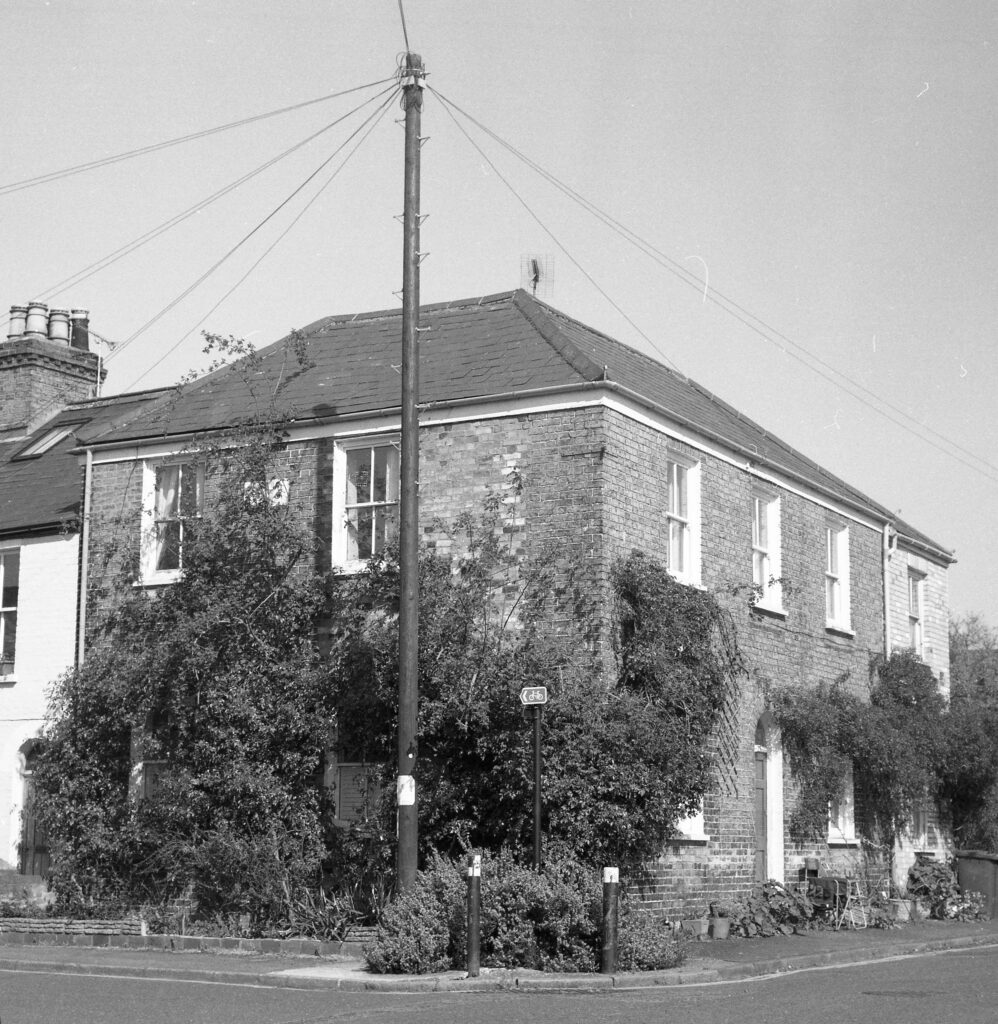 The name Florence Villa may refer to Florence Almond, niece and adopted daughter of its first owner, Mark Almond. The house was built by 1871, in which year Mark Almond was granted a beerhouse licence, permitting him to serve beer, cider and perry (Cambridge Independent Press, 30 September 1871); he named it the Great Eastern Tavern. He did apply for a spirit licence to convert the tavern into a public house, but this does not seem to have been granted. It is referred to specifically as a beerhouse in the 1879 Post Office directory, and similarly in the 1910 land tax records. In 1874 Mark Almond had sold the beerhouse to brewer Frederic Freeman, whose business was taken over by the Star Brewery in 1903.

The reason for there being so many pubs in the area is because the water was dirty and carried diseases such as cholera and typhoid, so beer was safer to drink, as the water had been boiled and thus sterilised. It was common for young children to drink weak beer for this very reason, called ‘small beer’, hence the saying that something insignificant is just ‘small beer’! However, there were still outbreaks of water-borne diseases in this area throughout the late nineteenth and early twentieth centuries.  The situation was only improved with the building of the sewage pumping station at Riverside in 1895, and the Bath House on Gwydir Street, providing better sanitation to Sturton Town residents.

In 1881 and 1891 the publican was not living on the premises. It is possible that the beerhouse occupied the ground floor only, and the upper floor, using the Hooper Street entrance, was treated as a private property.

Living with Emma and William was Robert Hayhoe, not described as a relation although he is only 9 years old. His motive for living with them may have been for his family to send him to school, looked after by an elder couple.

In 1886 one James Manning was tried for stealing three cabbages from the garden of William Dowsett of Hooper Street (Cambridge Independent Press, 18 September 1886). The defendant claimed he thought the garden was that of his friend Mr Wilderspin. It turned out that, ‘so ignorant was Mr Manning as to the boundaries of his friend’s garden, that he actually weeded the prosecutor’s turnips instead of Mr Wilderspin’s.’ The case was dismissed.

In 1891 Samuel Derby lived with his parents in Gold Street, the Kite, and his occupation was confectioner. His apprenticeship was not happy. Two years earlier he had narrowly escaped prosecution for absenting himself from work for two days (Cambridge Daily News, 12 March 1889). He claimed he had been unwell due to neuralgia, but his master had no sympathy. ‘He asked that his indentures might be cancelled as he was not happy. Everybody seemed to work against him.’ Fortunately a chemist testified that Samuel had bought medicine from him several times. Nonetheless, the magistrates ordered Samuel to perform the duties of his apprenticeship on pain of imprisonment.

Luckily he found his métier as a publican. In 1900 the newspapers carry reports of two pub skittle matches:  Sam Derby’s Eastern Tavern Boys versus Con Griffiths’ team from the Waggon and Horses, Mill Lane (Cambridge Daily News, 12 and 29 January 1900). The Waggon and Horses team won the first match and the Tavern Boys won the second.

Carpenter and joiner John Clark, born in Soham, had come to Sturton Town by 1891 and never left. In 1891 he was lodging with retired leather worker Richard Farr and his wife Sarah at 19 Hooper Street.  In 1892 he married Jane Crabb, and in 1901 they and their four children were living at 16 Hooper Street. By 1911, with two more children, they had moved along the street to 110 Ainsworth Street. In Kelly’s Directory of 1916, John Clark is described as a beer retailer.

Jane’s father George Crabb was an agricultural labourer from Littleport. By the early 1870s George and his wife Ann and their young sons had left Cambridgeshire for Derbyshire and subsequently Yorkshire, where he worked as a navvy and drainage labourer. They left Jane in Littleport in the care of her widowed grandmother Phoebe. They may have hoped to find a better life away from the poverty of rural Cambridgeshire, yet George Clark spent time in Ecclesall Bierlow Workhouse towards the end of his life.

The Clarks’ eldest son Harold died in 1917 in the First World War, and is buried in Belgium.

Jane Clark died in 1925. According to the electoral registers, John continued living at 110 Ainsworth Street until 1929 with his children Mildred and Stanley. In 1930 two changes occurred: Mildred had married Charles Earl and the house had become 23 Hooper Street again. By 1931 we see another change: Mildred and Charles Earl had set up home next door at 108 Ainsworth Street, and John had moved in with them. He lived with Mildred and Charles and their children until his death in 1948, aged 80.

In 1939 the occupants were coal delivery driver James Brown, his wife Mary, her 23 year-old son Christopher Emery from her first marriage, and a ‘closed record’ – likely a child. In electoral register entries from 1934 and 1935 they were living with Mary’s daughters Mary and Edith Emery.

In 1970 the Star Brewery sold the house to Leszek Jakubowski, who used it as the registered office for a family firm. In 1978 it was sold to David Norman Sands.

Thanks to the Calverley and Fordham families of 23a Hooper Street (in the same ownership until 1883) for providing deeds and other documents that enabled us to unravel the early history of the building.

Thanks to Friends of Mill Road Cemetery for information on the Crabbs and their move up north. For more details on the Clarks and Crabbs, see: