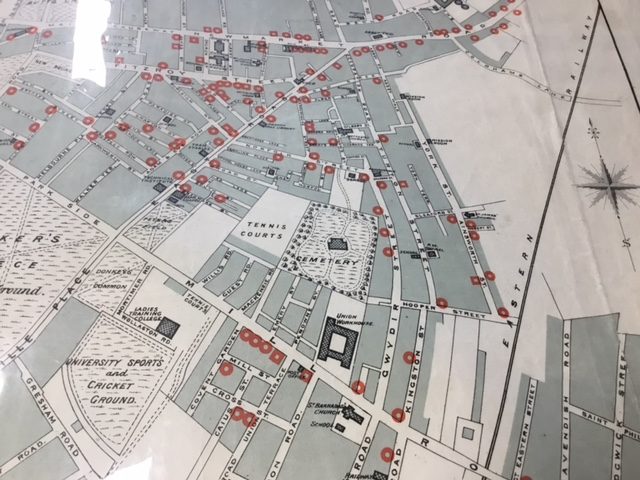 79 Ainsworth Street becomes The Empire Off License, probably brewing on site & possibly growing hops in garden; known by elders in the community who bought penny sweets there in 1950s/1970s!

In 1881, the building is home to the Egan family.  Joseph Egan, aged 46, is the Sergeant Instructor to the 1st Cambridgeshire Rifle Volunteer Corps.

The regiment had its origins in the rifle volunteer corps formed in Cambridgeshire and the Isle of Ely in 1860, and by 1880 had amalgamated to battalion size. In 1881 as part of the Childers Reforms, the 1st Cambridgeshire RVC were nominated as a volunteer battalion of the Suffolk Regiment. This RVC is the foundation of the later formed Cambridgeshire Battalion and then Cambridgeshire Regiment of the British Army, and troops from the regiments were in the Trenches during the First World War, and in fighting the Japanese in the far east during the Second World War. After the wars, the regiment was disbanded and it’s lineage is continued under the Royal Anglian regiment.

Joseph Egan also worked as a general dealer, according to the census, as he would have needed to make money as his role in the Army was in a Voluntary Corp and so would have been unpaid.

Also present in 1881 was Martha Egan, Joseph’s wife, who worked as a teacher, and his five children: Emily, aged 10; Joseph, aged 8; Edward, aged 7; Martha, aged 3; and Annie, aged 1. All the children attended school, except for Annie as she was too young.

The couple went on to have Eveline, Elvira, Thomas and William. Elivira was born at 79 Ainsworth Street in 1883 and died in 1887.  She is buried in Mill Road Cemetery along side her parents and her brother William who was born in 1887 and died in 1888.

In the 1891 census, there are 7 people registered as living at this address, including two lodgers. These include the three children of the Baker family, Ernest George, aged 5, who is listed as a scholar meaning he goes to school; his younger sister Bertha, aged three; and a baby boy called Percy aged about 6 months. Their parents are Sarah, who is 35, and George Baker, who is a Carpenter, possibly either producing furniture, or building outhouses and floors; for example, George would have been in fairly high demand given the rapid expansion of Cambridge during this era.

Also living at the address were two lodgers. The first is Rebecca Hall, aged 75, ‘living on her own means,’ on a retirement stipend, meaning she can pay her rent and lodgings in a private house rather than going into the Union Workhouse on Mill Road at her old age.

The other lodger is a 38 year old called Clare Hall, presumably the daughter of Rebecca Hall, whose occupation is listed as “Cook, dom,” which means she worked as a domestic servant, a cook in a private home.

On the Temperance Society Map in 1894, the building is shown as an off-licence, although on the 1901 census, because the residents appear to have no connection with the shop below.  Looking at the Licensing Registers at Cambs Archives once lockdown ends will help clear up the use of front room as an off-license/grocer with upstairs accommodation with residents listed on census.

On the 1901 census, the residents are shown as John and Margerita Dippold, the couple who were running the Claremont Arms opposite in 1891, with Margarita listed as the publican and John as pub/tailor. John is 71, only listed in 1901 as a tailor, and no longer a publican or brewer, and 68 year old Margerita is not listed as working, but there is a possibility they are running off-license as it is listed as such.

On the 1911 census the residents of number 79 are the Edwards family, who are described as running the off-licence.  From 1891 to 1901 they were recorded as living across the road at number 77.

55 year old Samuel Edwards is listed as the ‘gardener to off licence’ and his wife, Emma, aged 54, and 2 eldest daughters, Alice, aged 29; and Lillie, aged 27, are working as ‘Assist in off-licence’.

Samuel and Emma’s daughter Minnie, aged 21, is working as a dressmaker, and their only son, Lewis, aged 13, is still at school.

Also present at the house are two lodgers: 81 year old John Dippold, the German tailor who used to run The Claremont, whose wife Margerita has likely died, and he is likely helping the off licence to grow their own hops because he had some experience in that area, which would explain why the off-licence needed a gardener and why number 81 is, and always has been an empty or garden plot.

The other lodger is 28 year old John Newman, a compositor, so again he would likely be helping them pay their rent and paying for his food and laundry to be done as a lodger, likely to be working as a compositor in one of the many printing businesses in Cambridge.