Self Guided Tour of Newtown Cambridge

The list below of links to the Capturing Cambridge website is a selection of the more interesting entries en route. Information about most of the buildings, and their historical occupants,  that you will pass on this tour, and many that have vanished, can be accessed on the web site.

As with our other tours, suggestions of corrections and additions are most welcome and should be offered via the email address on the website.

Note the City Council’s own study of this area:

2.1 Hills Road, home of the Wentworth family then the Roman Catholic Presbytery

16.6 Coronation Street (site of), home of William Butcher and then Mrs Howes

Just before turning right towards Norwich Street, ahead across the playground is:

28.34 Norwich Street, home of the Goodman family who lost two sons in WWI

29.24 Norwich Street, a history of the property

36.1 Bateman Street, home of Clark family in 1871, then of American professor of pathology Frank Knowlton in  1911

37.3 Bateman Street, home of the ‘Cambridge Nightingale’ and the Shrubbery School

Turn right on to Brookside

62.20 Brookside, home of Louis Goss, benefactor to the University, Edouard Allen Goss, killed in action on the first day of the Battle of the Somme

67.The Spread Eagle, home of Nelson Fielding, died of wounds 1915

Cambridge Circumambulation May 2020 by John McGill 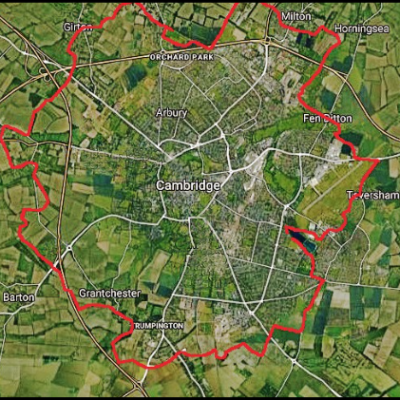